Space craft was found washed up in Freeport 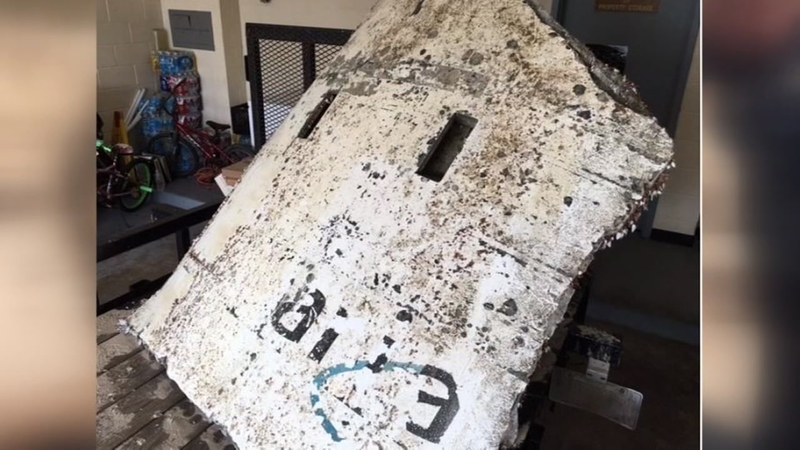 FREEPORT, TX (KTRK) -- The tide brings with it strange things and countless pieces of debris. From driftwood to trash, the sand along the southeast Texas coast is littered with it.

But in Freeport it stranded something alien.

"We find a lot of strange things but this is definitely a first for us," said Freeport Police Chief Daniel Pennington. "Clearly it looked like it was something that had to do with either a plane or a ship is what we initially thought."
EMBED More News Videos

Our John Lennon special will tell the story that shook the world from a perspective you've never seen -- as it happened, moment by moment, through the eyes of Eyewitness News.

A passerby spotted the 8 foot by 8 foot barnacled rectangle in the sand and flagged down a police officer on patrol.

As it turns out, this flotsam was jettisoned from a European rocket called an Ariene Five.

It's a heavy lift vehicle that launches satellites and brings supplies to the International Space Station. It launched less than a month ago from the edge of the Amazon Jungle in Kourou, French Guiana, some 3,200 miles from Freeport, Texas.

"We talked with the FBI and the FAA. They got the information back to us," said Chief Pennington. He told Eyewitness News that the company which produced the rocket, ArieneSpace, will come collect the junk in the coming days or weeks.

Instead of burning up after the rocket separated, as designed, this piece somehow landed back in the Atlantic, orbited the Gulf, and stranded itself on a foreign land.
Related topics:
sciencehoustonspace
Copyright © 2021 KTRK-TV. All Rights Reserved.
TOP STORIES
Arrest made in case of Alvin abduction, sexual assault of a minor
20-year-old shot to death during break-in of Conroe home, police say
Man accused of dismembering mom's body after murder appears in court
Houston Astros on pace for record beer year
Astros Game 6 guide: Closures around Minute Maid Park back on tonight
The University of St. Thomas offers low-cost counseling services
JJ Watt on Texans: 'It hurts me to see where' fan base is now
Show More
Don't get stuck in these traffic closures this weekend
Warrant: Baldwin didn't know weapon contained live round
Prop guns: What they are and how they can kill
4 teens accused of luring victim to his death in SE Houston
SkyEye13 captures video of Bay City funeral home destroyed in fire
More TOP STORIES News