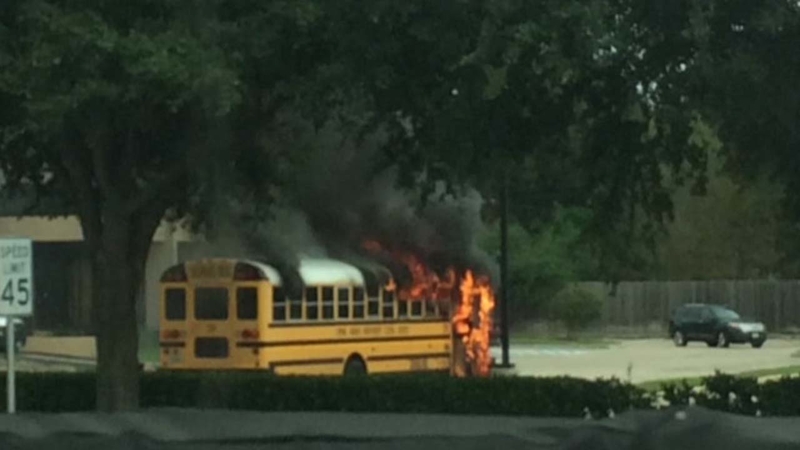 HOUSTON (KTRK) -- A Spring Branch ISD bus driver is being praised for his quick actions that kept more than two dozen students safe from a fiery explosion on their bus Friday afternoon.

A district spokesman says the bus had just left Westchester Academy on its way to the Guthrie Center on Hammerly Road when the bus driver heard a sound and smelled smoke. He pulled into a parking lot along the West Sam Houston Pkwy N and quickly evacuated the 30 students who were on board.

The bus driver, who has worked for the district for 21 years, then grabbed a fire extinguisher and tried to put out the fire. It only got worse. Flames engulfed the front of the bus followed by an explosion.

The students and office workers looked on. Bernard Ochieng recorded the blaze and explosion on his cell phone.

"It was a little overwhelming. Kids were involved, at least nobody was in danger, but the fact that there was a bus on fire, huge flames, a lot of smoke, it was crazy," said Ochieng, who works at a nearby technology company. "The front of the bus was burned entirely. it was all gone."

No one was hurt. The students were loaded onto another bus and taken to their destinations. The cause of the fire is under investigation.

Thankful for a swift-acting bus driver & a safe evacuation of riders earlier today. Bus fire is out. Everyone is safe. #CollectiveGreatness