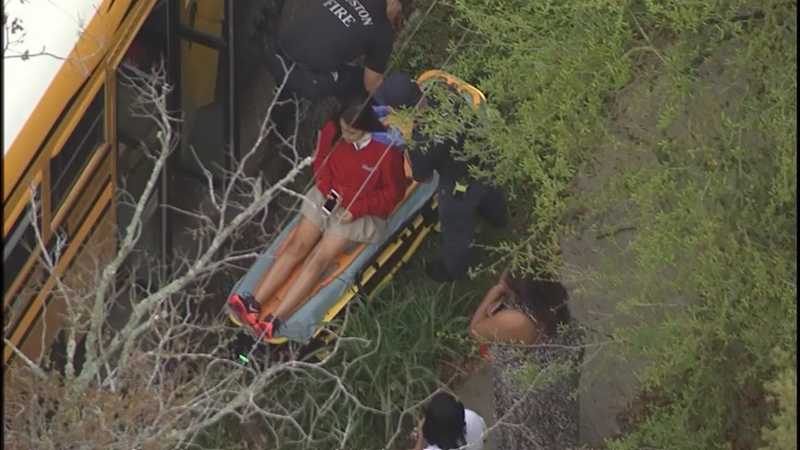 HOUSTON (KTRK) -- A bus crash in southeast Houston left everyone shaken this morning as seven Houston ISD students went to the hospital. A total of nine students were on the bus.

Alexander Jimenez was the driver of the car that hit the bus.

Multiple students were injured after a wreck involving a school bus.

"I'm in shock. I'm really in shock that this happened to me," said Jimenez.

PHOTOS: Images from the accident

Marla Carter was on the scene, where 7 students were injured.

Fortunately, none of the injuries are considered serious. In a statement, HISD says the driver will be reprimanded and receive additional safety training, which includes a safety monitor being temporarily assigned to the route. The district released this statement about the accident:

An HISD bus was involved in an accident Friday morning at the intersection of Old Galveston Road and Park Place Boulevard while en route to Lamar and Challenge Early College high schools. Though no one was seriously injured, seven of the nine students on board were taken to the hospital as a precautionary measure. HISD Police is investigating the accident. The bus driver was cited for failing to yield right of way when turning left onto Park Place Blvd. The driver of the other vehicle was cited for driving without a license.

In addition to the citation, the bus driver is receiving a reprimand and additional safety training, which includes a safety monitor being temporarily assigned to the route.

Jimenez was driving without a license and without insurance and was issued a ticket. Still, he contends the accident was not his fault.