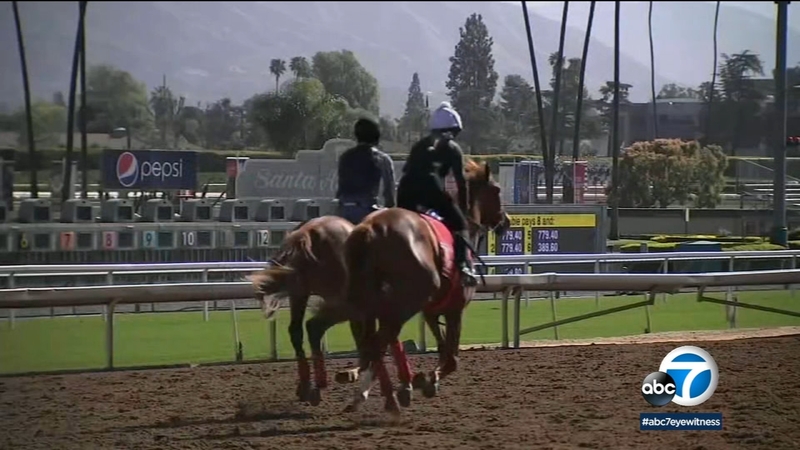 ARCADIA, Calif. -- A horse has died at Santa Anita Park, the 25th horse to die at the track since late December.

It is the second horse death to be reported at the park in the span of four days after six weeks without a horse dying at the track.

The horse, a 3-year-old gelding named Spectacular Music, sustained a fatal injury to his pelvis Sunday while racing, park officials said in a statement.

"Equine pelvic injuries are rare, and further evaluation is being conducted by the California Horse Racing Board, per protocol, to understand what could have caused this uncommon injury," park officials said.

On Friday, a 3-year-old gelding named Commander Coil died during training when it suffered a shoulder injury and was euthanized.

Sen. Dianne Feinstein, who recently called for a suspension of racing at the track during an investigation of the cause of the horse deaths said in part in a statement, "Two more horses have died at Santa Anita Park over the last four days, a stark reminder that the problems that led to 23 dead horses over three months haven't disappeared. How many horses must die before serious action is taken?"
Report a correction or typo
Related topics:
sportshorsesanimal
Copyright © 2021 KABC-TV. All Rights Reserved.
More Videos
From CNN Newsource affiliates
TOP STORIES

Another round of showers and storms Thursday
DPS trooper wounded in Bryan mass shooting gets hero's welcome
Multiple earthquakes reported across Texas
Tomball ISD plans for 'mask optional' 2021-22 school year
County-by-county breakdown on COVID-19 vaccine distributions
Show More
How many people in your area are hesitant to get the COVID-19 vaccine?
Dems to introduce bill that would expand Supreme Court from 9 to 13
US Secretary of State in Afghanistan to sell Biden troop withdrawal
US expels Russian diplomats, imposes new round of sanctions
Ruff job: Busch will pay your pup $20K to be its official dog beer taster
More TOP STORIES News