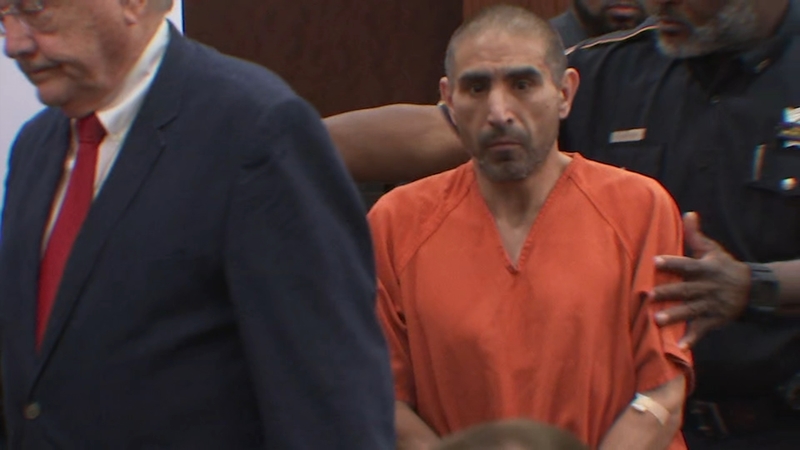 Robert Solis, 47, is charged with capital murder in the death of Deputy Sandeep Dhaliwal.

"It is a likely outcome that death will be the sentence here," said Judge Chris Morton. "No bond is appropriate."

Defense attorney Allen Isbell told ABC13 outside the courtroom, "Of course capital murder carries life without parole or the death penalty. And historically sometimes they seek the death penalty when a police officer is the victim."

Isbell added that he has only spoke briefly with Solis but that he is subdued and appears to understand the seriousness of the charges against him.

On Monday afternoon, the Solis family issued a statement, saying they wished to share kind words during this difficult time of sorrow.

"Our hearts are broken for Deputy Sandeep Dhaliwal's family. Our thoughts and prayers are with the family, the community supporting him and the honorable officers who he came into contact with. We are struggling to find understanding of this senseless and individual act influenced by fear, while also praying for our own families affected in this devastation. We wish for peace on both sides, and hope that Robert will seek Christ above all else."

Prosecutors say Solis and his passenger told investigators Deputy Dhaliwal pulled them over for running a stop sign. Dash camera video shows Dhaliwal walk away from the suspect's vehicle, back towards his own. That's when police say Solis can be seen getting out of his car and running towards him, firing his gun several times.

According to Harris County Sheriff's Office Maj. Mike Lee, deputies immediately checked the dash cam video inside Dhaliwal's unit to get a closer look at the suspect when they arrived on scene.

"It was a total ambush by the suspect," Lee said. "The deputy never had a chance."

Authorities say 47-year-old Robert Solis was caught on surveillance video trying to throw away the gun used in the murder outside a nearby business.

Lee says the suspect was found inside a business about a quarter of a mile away from where Dhaliwal was shot.

"A deputy observed that he looked a little nervous and put him in custody, and that did turn out to be our shooter," Lee said.

Lee adds the weapon believed to have been used to shoot Dhaliwal was recovered in the parking lot of the business.

It was revealed in court early Saturday morning that Solis was caught on surveillance video trying to throw away the Glock 45 caliber semi automatic gun used in the murder.

Officials say Solis called friends after the shooting and told them he just shot a deputy and needed to be picked up.

"I believe it was a suspect, he has a lengthy criminal history, on parole, probably knew he was going to go back to jail and did not want to go back to jail," said Lee when asked about a possible motive. "It was senseless."

He also has past charges for aggravated kidnapping, aggravated robbery and driving while intoxicated.
A woman, who is believed to be a passenger in the suspect's car, was also detained and placed into custody. Her identity was not released publicly.