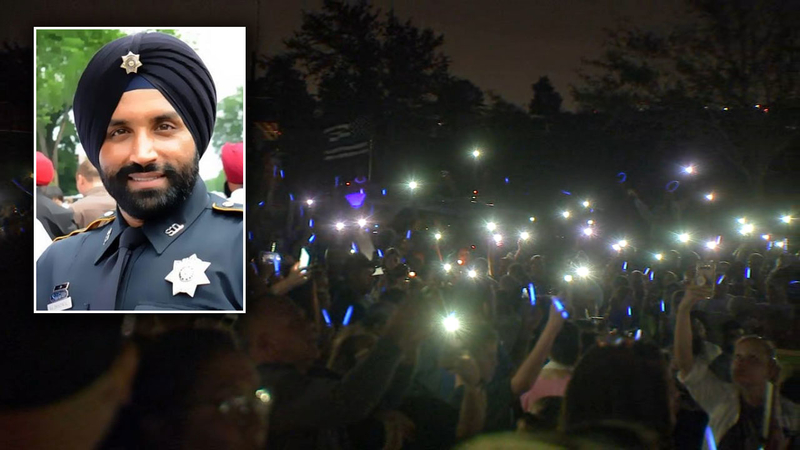 HOUSTON, Texas (KTRK) -- A large outpouring of support was on display Monday night for a candlelight vigil honoring Harris County Sheriff's Deputy Sandeep Dhaliwal, who was shot to death during a traffic stop on Friday.

The vigil was held Monday night at GoForth Park on Horsepen Creek in Cypress.

The park is named for another deputy who was killed in the line of duty in 2015, Deputy Darren GoForth.

"For me, Deputy Dhaliwal represents all that is good, all that is right, all that is just," said mayor Sylvester Turner at Monday night's vigil for Deputy Sandeep Dhaliwal.

After GoForth's shooting, Deputy Dhaliwal visited his memorial daily, saying at the time, more people need to support officers and do so in a visible way.

"Just wear blue. Wear blue and be proud of that," Dhaliwal said four years ago. "And that shows support to law enforcement. Simple as that."

Now, everyone wore blue for Dhaliwal.

At @HCSOTexas Deputy Sandeep Dhaliwal’s memorial...
messages of hope and
sadness and
love and
anger and
fear and
heartbreak and
appreciation. #abc13 https://t.co/9htlAKYUz6 pic.twitter.com/VuZjLfLSXX

Dhaliwal, a 10-year veteran of HCSO, was the first member of the Sikh community to join the sheriff's office. He's survived by his wife and three children.

"First thing I want to say to his father is thank you for raising a son with the values that you gave him," said former sheriff Adrian Garcia.

“Lord, if some dark and dreary night,
I must give my life,
Lord with your everlasting love
Protect my children and my wife.”

A note left at the memorial for HCSO Deputy Sandeep Dhaliwal.

“He was everyone’s Bhaiya, big brother”
Another of the cards left at the memorial to HCSO Deputy Sandeep Dhaliwal #abc13eyewitness pic.twitter.com/RRj261AYVq

A card left by a child at the memorial for HCSO Sandeep Dhaliwal #abc13eyewitness pic.twitter.com/nWql0B1Kbw