Many share how Deputy Dhaliwal's service impacted their lives 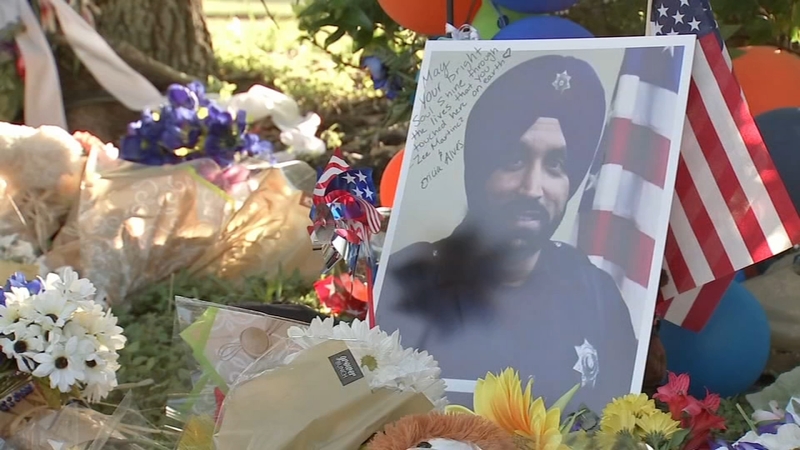 Many reflect on personal stories with Deputy Dhaliwal

A neighborhood park is now the site of a memorial to a Harris County deputy slain during a traffic stop Friday afternoon.

It is across the street from where Sandeep Dhaliwal was shot twice. The accused gunman was arrested less than an hour later at an ice cream store.

Dhaliwal was the first deputy to wear a turban and a beard, blending the articles of faith of his Sikh religion with his uniform. The turban set him apart, identifying him as a Sikh, symbolizing his dedication to service.

On Sunday, people showed how that service affected their lives.

At a vigil that featured a bubble release, Lashandra Williams recalled the one time she met Dhaliwal.

"It was on the worst day of my life," she said. She was a victim of domestic violence, and pregnant.

"I called 911, and he was the deputy who responded," she said. "He held me and told me everything was going to be alright, and for me to calm down. He was the one who called paramedics to check and see that my baby was okay. I'm grateful for him even though it was on a bad occasion. God puts people in your life for a reason."

RELATED: Deputy shooting timeline: What we know about what happened

Community advocate Bobby Singh said Dhaliwal's decision to join law enforcement followed an unfortunate incident in 2008, in which a Sikh family's home had been ransacked.

"They called law enforcement. The deputy who responded told the husband he had to surrender the ceremonial dagger he wore, that was part of his articles of faith," Singh said.

Singh engaged with then-Sheriff Adrian Garcia to provide diversity training for the department.

"He said if you really want to change things, we need someone from your community to be part of law enforcement," Singh said.

It was Dhaliwal who stepped up, leaving behind a business to serve others. The department changed its uniform policy, that allowed him to retain his beard and wear a turban.

Sheriff Ed Gonzales said he is receiving calls from other agencies around the country that have changed their uniform policies as well, because of Dhaliwal.

His memorial service is scheduled for Wednesday, but his memory will live on for people who encountered him like Williams, who now has a young son.

"When he's old enough to understand, I'll let him know that this officer who lost his life tragically, saved your life," she said.