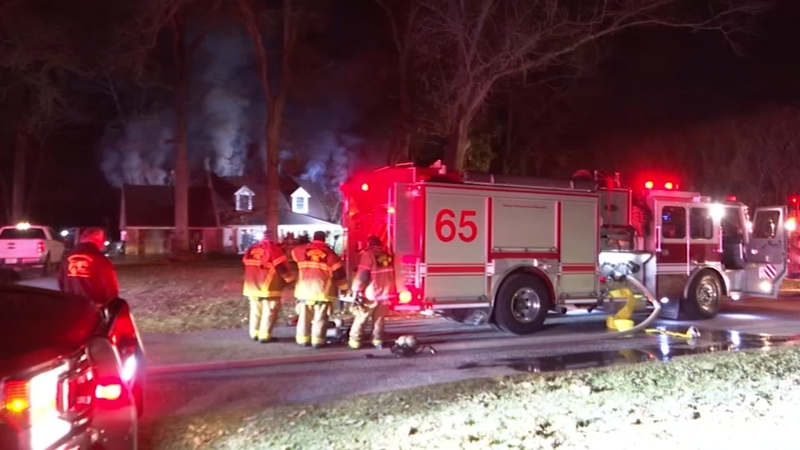 HOUSTON, Texas (KTRK) -- After watching his home burn down this weekend, Scott Smith said he is thankful his family is safe and can rebuild. But he is frustrated that his neighborhood has no hydrants and firefighters, despite a quick response, took a long time to put out the flames.

This is not the first time a home has burned in this neighborhood annexed by the city decades ago. Three homes have caught on fire here, including Duane Cannon's when it was under construction.

Twenty years ago it burned to the ground. He would have thought by now there would be a solution.

"The blaze was already over the ridge of the house. That was 6:30 a.m. and it was 3 p.m. before they got the fire out," he said. "(We have) been paying taxes for 20 years but we still have no water, still have no sewer, and still have no drainage."

ABC13 contacted the city of Houston Public Works Department and learned the department first received a complaint about a lack of hydrants in 2011. An investigation led to finding out the community is built along a private road. So the city cannot install hydrants, but we've learned the neighborhood could grant an easement and pay for the installation of a fire-only water line. This is something residents did not know was a possibility, until we informed them.

Jesus Covarubbias lives in the adjacent neighborhood, Summer Lake Ranch. He showed us video of his home burning in December 2020.

"We had issues getting water to the house," Covarubbias said. "It caught fire. It was 100% a total loss. I would hate for that to happen to someone else."

When ABC13 checked with the city on his behalf, we learned that despite having a Houston address, he's not actually in the city of Houston. This means the city would not be the primary agency to respond to a fire.

If nothing else, it appears there is a lot of confusion among residents about who put out the flames and how. The best advice is that if you have a question about water or hydrants in your neighborhood and you do or think you live in the city call 311.