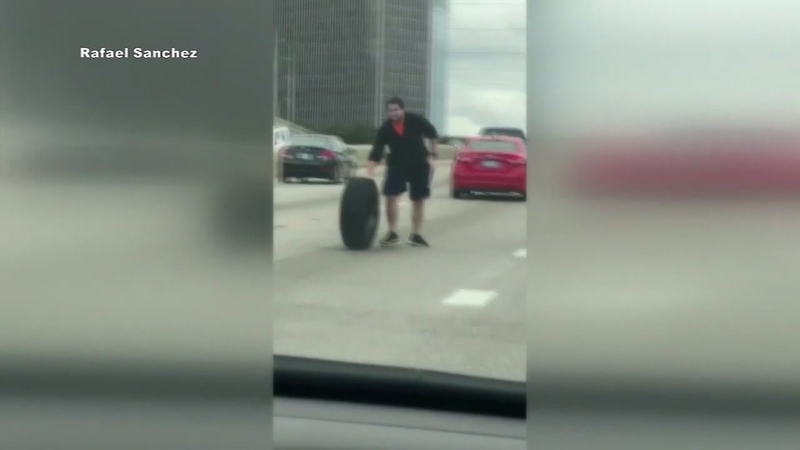 Man explains chasing after runaway tire on I-45

HOUSTON, Texas (KTRK) -- A Friendswood man said adrenaline took over once he started to chase after a loose tire on I-45.

Mitch Chapman said shortly after buying his new vehicle in Spring, he knew something was wrong when he made his way to downtown.

"We felt like the back end was wobbling around. That's when we thought we had a flat tire, and then we started thinking the rear end blew out," Chapman recalled.

Suddenly, the tire fell off, and Chapman spotted the bouncing tire and chased after it.

"If the traffic was going, I definitely would not have gone for it," Chapman said. "But I looked and I saw all lanes stopped so, I was like, 'Right now, it's either now or never.'"

Thankfully, Chapman was safely able to retrieve the tire and get it back on the vehicle.

"All the other ones happened to be loose as well," Chapman said. "Luckily, it was only that back tire and not all four."

This is a problem Poutus Auto Repair manager Michael Poutus has dealt with before.

"You can feel it building up," Poutus explained. "It's similar to a tire getting ready to blow out. It'll start bouncing, and you'll feel something different than normal."

Poutus said a runaway tire can occur after work is done. Next time you have tire work, Poutus said to ask if a torque wrench was used.

"You can do body damage," Poutus said. "You can hurt another person with a tire flying down the road at whatever speed you're going."

Chapman said he ran after the tire because he was afraid of the damage it could cause to another vehicle. It's a viral moment that thousands have watched online.

The person who recorded the video can be heard laughing. Chapman can laugh now too after he said he learned a valuable lesson to check the lug nuts whenever he buys a vehicle.

"I didn't think the guy was wrong for doing it," Chapman said. "I thought it was actually pretty funny, and thanks to him now myself, and my family we're going to have something to joke about for however long."

SEE MORE: Man caught on video chasing down tire through Houston traffic on I-45