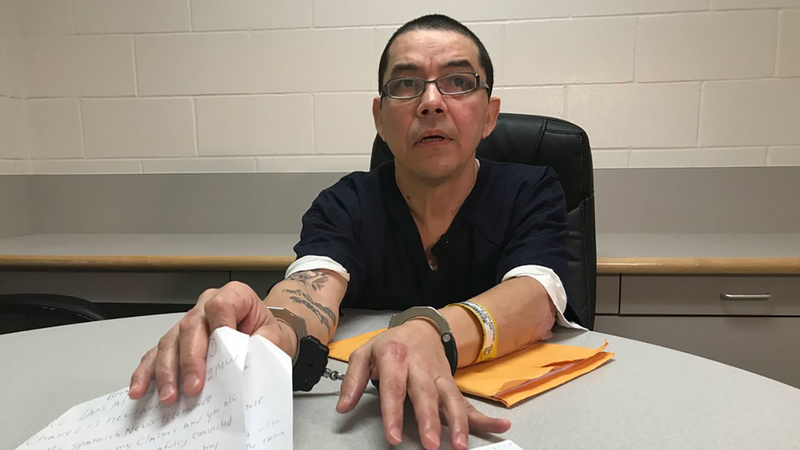 Killer in Rosenberg woman's death: 'I didn't know I put that much pressure'

ROSENBERG, Texas (KTRK) -- The man who previously denied any involvement in the death of a Rosenberg woman now admits he killed her.

He just pleaded guilty to the murder of Nancy Dean in September of last year. He was charged with capital murder, and prosecutors say they wanted to seek the death penalty.

In a jailhouse interview, Gonzalez read to us from an apology letter he gave to the family of his victim.

"I know saying I'm sorry will never be enough," said Gonzalez. "I come to you all and ask for your forgiveness for what i did to y'all."

Dean was found dead after a fire at her home in the 5100 block of Cotter Lane on Sept. 3, 2016. Detectives early on identified Gonzalez, a convicted sex offender living nearby, as a person of interest. He fled to Mexico only to be found six months later.

When Eyewitness News interviewed him in the Fort Bend County Jail in March, he denied any involvement in her murder.

"I ain't got nothing to hide," Gonzalez insisted.

This time around, a different story.

"I guess I ended up, putting my hand on her...but I didn't know I was putting that much pressure," Gonzalez recalled. "Until I felt about four minutes later, I didn't see no more movement of her."

Gonzalez said Dean had invited him into her home after he cut her yard. He said that they had drinks over the course of a few hours, that they got to know each other and even began kissing.

She allegedly said something that set him off: A comment on his prior sex assault conviction and whether people would believe she agreed to be with him.

Gonzales said Dean told him, "'You think its consensual, but if I really wanted to, I could say that you are attacking me and they're gonna believe me because you're an ex-con.' And that's when I lost It."

After denial, suspect confesses to Nancy Dean's slaying, in an ABC13 EXCLUSIVE.

"My intention was not to kill Nancy Dean," Gonzalez insisted I really wasn't trying. When you shake up like that - by me being so angry - and the pressure I was putting, I didn't know I was putting so much pressure on her. Then when I noticed she was dead already, I was like, 'Oh well.'"

"I regret everything," he said.

He'll now spend the rest of his life in prison thinking about it.