Step inside a masterpiece with these handmade custom boots 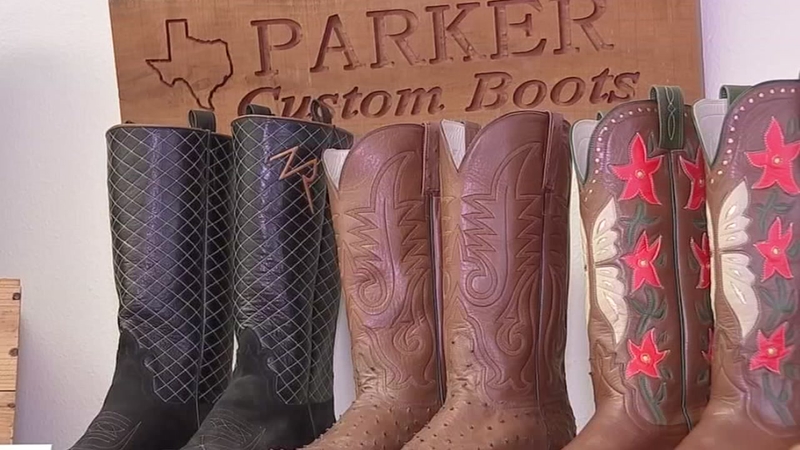 HOUSTON, Texas (KTRK) -- It's almost rodeo time, and if you don't have boots, you may have to wait till next year if you want a custom pair from a Houston boot maker.

I’m showing off my boot-making skills this morning and introducing you to a craftsman who is in high demand. @abc13houston #boots pic.twitter.com/xWvWUaA1Dq

"Everything is custom-made 100 percent," said Zephan Parker. "There is nothing generically made."

Parker makes the boots in his northwest Houston shop. He showed ABC13 how he makes the boots from scratch, and the nearly centuries old machines he uses to put it all together.

"You'll hear some of the sounds of those machines, which is almost like an echo from the past," said Parker.

First, he offers a custom foot fitting. Parker said the foot mold is the most important part. Next, Parker has a number of materials to choose from including various animal and reptile skins. His most expensive material, alligator, could cost as much as $5,000. But perhaps the most unusual skin customers can choose from is an Amazonian fish called the Pirarucu.

"It's becoming more popular. We are seeing a lot more boot companies providing it," said Parker.

After selecting the skins, Parker hand sketches the design, punches it out on the material of choice, and then begins to stitch it on his old school sewing machine.

"The cowboy boot itself is a piece of fashion footwear that can be worn or accessed by every level of society," Parker explained.

Parker has a rather unusual story on how he became a boot maker. He didn't come from a lineage of boot makers, he started out as a customer at the age of 22. Parker said a boot maker in central Texas inspired him.

"I was just intrigued by the set up that he had and a piece of Americana that he had," said Parker.

Parker said he started an apprenticeship, and then several years later, he launched his own business in Houston.

"A lot of older guys are retiring and their children are taking on other careers and what not," said Parker.

The finished product is a true masterpiece.

Prices start around $1,400 and go up, depending on the material you choose.