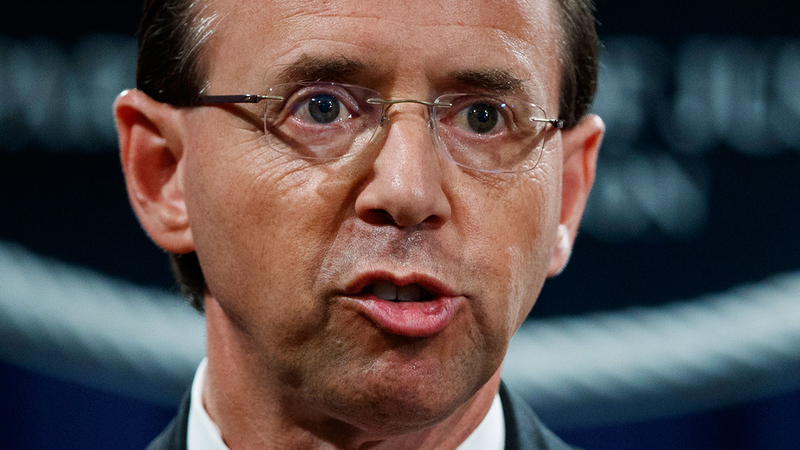 WASHINGTON -- Deputy Attorney General Rod Rosenstein headed to the White House Monday morning amid reports he was expecting to be fired, but instead, he will meet with President Donald Trump Thursday with an uncertain fate.

The White House said Rosenstein spoke Monday with Trump, who is in New York for a meeting of the U.N. General Assembly.

The developments come three days after news reports indicating that last year Rosenstein had raised the idea of secretly recording Trump and of invoking the Constitution to have his Cabinet remove him from office.

Any termination or resignation would have immediate implications for special counsel Robert Mueller's investigation of possible collaboration between Russia and the Trump campaign before the 2016 election. Rosenstein appointed Mueller and oversees his investigation.

Solicitor General Noel Francisco, the highest-ranking Senate confirmed official below Rosenstein in the Justice Department, would take control of the Mueller investigation.

Trump had previously floated the idea of firing Rosenstein in April after FBI raids of the office and home of the president's longtime personal attorney, Michael Cohen, who has since pleaded guilty to several felonies and taken part in hours of interviews with Mueller.

But the latest move comes after a New York Times report of Rosenstein comments in 2017. That report and an unsigned opinion piece by a senior official in the Republican administration played to some of the president's concerns about a secret "Deep State" trying to undermine him from within the government.
The administration official, whom Trump has called for a federal investigation to unmask, wrote that there was a group of officials working to safeguard the country from the president's most dangerous impulses. And Trump's behavior had prompted "whispers" in the Cabinet of invoking the 25th Amendment, a move that was backed away from due to concerns it would "precipitate a constitutional crisis," the writer said.

In Rosenstein's case, he has said that the Times report was inaccurate and said it was based on "biased" anonymous sources "advancing their own personal agenda."

"Based on my personal dealings with the president, there is no basis to invoke the 25th Amendment," Rosenstein said.

The Justice Department also released a statement from a person who said Rosenstein's recording comment was meant sarcastically.

As of Sunday, the president said he had not decided what to do about Rosenstein. He angrily asked confidants, both inside and outside the White House, how to respond. He received mixed messages. Some urged him to fire Rosenstein. Others suggested restraint while seeing if the report was incorrect or if it was planted by some adversary.
Rosenstein appointed Mueller as special counsel in May of last year and has strongly defended his work and independence.