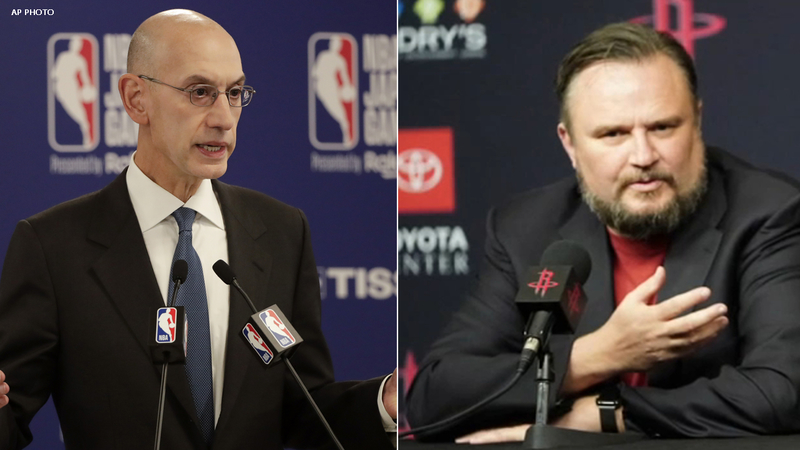 But Silver, speaking to Kyodo News in Tokyo, acknowledged the impact of Morey's recent tweet, which supported anti-government protesters in Hong Kong.

"There is no doubt, the economic impact is already clear," Silver said. "There have already been fairly dramatic consequences from that tweet, and I have read some of the media suggesting that we are not supporting Daryl Morey, but in fact we have.

"I think as a values-based organization that I want to make it clear ... that Daryl Morey is supported in terms of his ability to exercise his freedom of expression."

Silver spoke ahead of an exhibition game between the Rockets and Toronto Raptors on Tuesday in Saitama, Japan.

Morey on Friday posted a tweet with an image that read: "Fight for Freedom. Stand with Hong Kong." He later deleted the post and tweeted an apology. That came after Rockets owner Tilman Fertitta publicly clarified the team does not take political positions.

The strong reactions to Morey's tweet underscore China's sensitivity about foreign attitudes toward the ongoing Hong Kong protests that have grown into violence in the semi-autonomous territory. China has accused foreign parties in the United States and elsewhere of encouraging the demonstrations.

The protests were sparked by a proposed extradition law that would have allowed suspects to be sent to China to face trial. Activists saw that as a threat to the legal rights that Hong Kong residents have under the current "one country, two systems" framework.

The NBA has been criticized for putting its economic interests ahead of defending Morey's right to express his views. Silver answered that criticism Monday, saying, "What I am supporting is his freedom of political expression in this situation."

Silver noted, however, that he also supports Brooklyn Nets owner Joe Tsai, a co-founder of Chinese e-commerce giant Alibaba, who posted a 736-word open letter on his Facebook page late Sunday night saying Morey stepped on what he described as "a third-rail issue'' when it comes to China and Hong Kong.

"These are complex issues. They don't lend themselves easily to social media," Silver said. "I can't ultimately run the NBA based on trying to satisfy everyone on Twitter.

"For those who choose also to engage, they'll see that we are dealing with a complex set of issues. And I will just add that the fact that we have apologized to fans in China is not inconsistent with supporting someone's right to have a point of view."

Silver's comments came after the NBA weighed in on the controversy Sunday night, saying in a statement: "We recognize that the views expressed by Houston Rockets general manager Daryl Morey have deeply offended many of our friends and fans in China, which is regrettable. While Daryl has made it clear that his tweet does not represent the Rockets or the NBA, the values of the league support individuals' educating themselves and sharing their views on matters important to them."

The NBA has worked for at least 30 years to promote strong relationships with China. The league has an office in China and just announced plans to add a gaming team in Shanghai to the NBA 2K League. Officials in both countries say as many as 500 million Chinese fans watched at least one NBA game last season.

"Members of the NBA community remain free to express their opinions and the league backs their right to do so," Silver said. "There are the values that have been part of this league from its earliest days, and that includes free expression.

"I accept that it is also Chinese governments' and Chinese businesses' right to react to those words and, at least from my longtime experience in the NBA, it will take some time to heal some of these issues.

"We are a platform in which people can engage and I would like to believe that for each side who believes they have a point of view here, that this engagement is positive."
Report a correction or typo
Related topics:
sportshouston rocketschinau.s. & worldbasketball
Copyright © 2022 ESPN Internet Ventures. All rights reserved.
TOP STORIES
Death toll rises to 21, mostly children, in TX school shooting
Uvalde school shooting: What we know about 19 kids, teacher killed
How to talk to kids about Texas school shooting
New documents reveal possible motive in Vanessa Guillen's murder
Gun violence activists demand action addressing mass addressing
Election 2022: Full results from Texas primary runoff elections
Weather Alert Day: Strong storms will blow through early Wednesday
Show More
Texas leads nation in school shootings since 2013, data shows
Bodycam footage released of man shot by HPD officer in late April
A look at some of the deadliest US school shootings
Houston-area leaders react to Texas elementary school shooting
NOAA predicts above average hurricane season for 2022
More TOP STORIES News