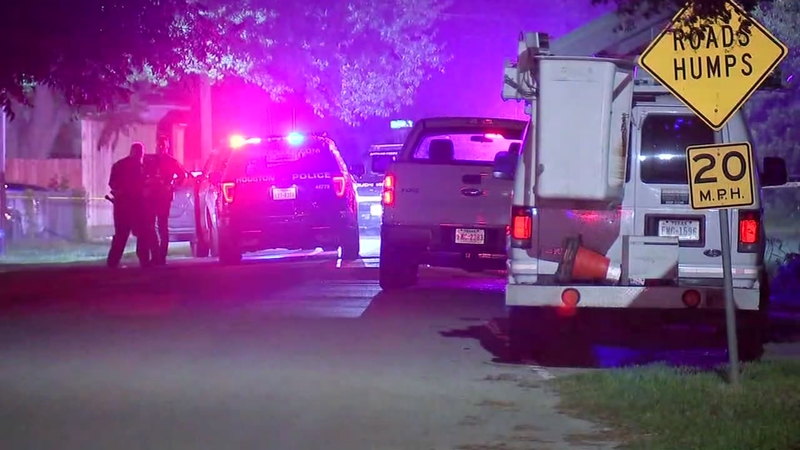 HOUSTON, Texas (KTRK) -- A teen suspect was shot several times after he and another person tried to rob two cable repairmen in north Houston, police say.

Police said the two repairmen were working on a cable box around midnight on Fulton Street and Veenstra when the gunmen approached them.

"It was just real quick. We were expecting the worst," said one of the technicians, who did not want to be identified.

In an exclusive interview with Eyewitness News, the technician said he and his partner were just getting started with their work for the night when two guys ran up to them, one with a gun, and demanded money.

He says the suspect fired off a shot before he was able to get on the ground.

"I went down to the ground and that's when he put his knee on my back and hit me on my sides. I thought it was over and that's when I started hearing the gun exchange right over me," the technician said.

He says his colleague, with a concealed handgun license, quickly drew his gun and fired back, warding off the suspects.

Police say one of the suspects was shot in the leg. He collapsed at the scene and was taken to the hospital. Investigators say he is in critical but stable condition and charges are expected.

The other suspect and a getaway driver are still on the run. They were last seen in a grey four-door sedan.
Report a correction or typo
Related topics:
houstonrobberyshootingguns
Copyright © 2022 KTRK-TV. All Rights Reserved.
TOP STORIES
Baby found inside apartment after deadly double shooting in N. Houston
HISD to stay closed through Tuesday due to rise in COVID cases
Man with AR-15 tackled by security while trying to rob game room
Man found dead in car after ShotSpotter reported gunshot in SE Houston
Customers of Cracker Barrel manager killed honor her: 'She stood out'
The big warm-up starts on MLK Day
17 Houston animal charities to support on Betty White Challenge Day
Show More
'Sick to my stomach': Dollar Tree fanatics protest new $1.25 prices
Betty White Challenge has fans donating to animal charities
HS student assaulted, robbed by middle school boys on his way home
Store manager killed while trying to stop men from stealing, HPD says
These are the best moments from the 2022 Chevron Houston Marathon
More TOP STORIES News