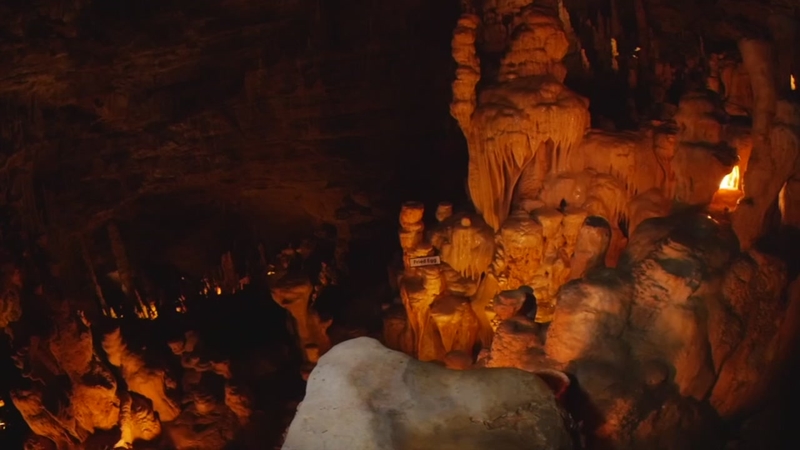 SAN ANTONIO, Texas (KTRK) -- You don't need to travel far outside Houston to climb deep underground. There's a place where you can walk down almost 18 stories and enter what feels like another world. The Natural Bridge Caverns located southwest of New Braunfels is one of the state's largest caves.

From Houston, it's about a six-hour road trip. Eyewitness News reporters Pooja Lodhia and Steve Campion recently teamed up as our "Texas Road Trippers" to give you a look inside this Lone Star state gem.

The duo meet up with Travis Wuest with the Natural Bridge Caverns. Wuest said the property was in his family for generations before they realized they had a treasure underneath their feet.

"Our family has been here on the property since the 1880s," said Wuest. "A significant part of the cave wasn't discovered until March 27th of 1960 by 4 college students from St. Mary's University in San Antonio. They heard about the natural bridge and the small cave that was known to exist underneath it. They came out on a series of trips after getting permission from my grandmother to explore and they made a huge discovery. They found over 2 miles of undiscovered cave. It turned out to be the largest cave in the state of Texas."

In July 1964, the Natural Bridge Caverns opened to public tours. One of the first things you notice inside are the giant rock formations which tower over you as you descend into the humid cave.It took centuries to make some of the formations which are still growing today.

The attraction has grown over the years. They now offer zip lining, a ropes course, and even a giant maze.