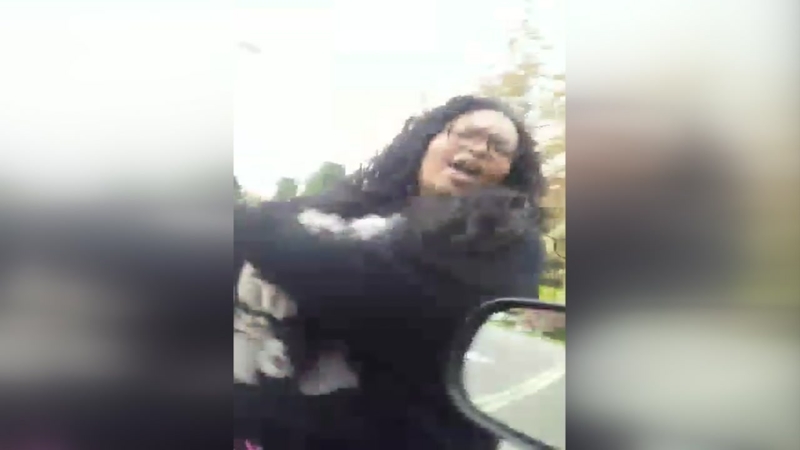 FRESNO, Calif. -- From a heated exchange to a violent fight, an act of rage is now an criminal investigation.

"It was just so scary and so chaotic," says the victim, Margo Ortiz.

From a heated exchange to a violent fight-- an act of rage is now an criminal investigation.

Ortiz took video Monday after she said a car hit her and took off. The video picks up at a red light where she pulls up next to the suspect and her passenger.

"Both of them started yelling at me. One tried to flick a cigarette into my vehicle and hit the back of my window and she said, 'You cut me off," said Ortiz. "I said, "I didn't see you and if I did-- if I cut you, off I'm sorry. But you actually hit me and you need to pay for the damage.'"

A road rage incident in northwest Houston turned violent this morning, and the entire altercation was caught on camera.

Ortiz said she did not want to get out of her car but was not willing to back down. So she told the woman to come to her.

That was where Fresno police said Ortiz should have driven away.

"Not a good idea. You know people could have a gun or they're bigger than you and you challenge them they challenge you they come back and she's going to take care of business with the cane-- not a good idea," said Lt. Joe Gomez, Fresno police.

A man is hit by a car in an apparent incident of road rage on the West Loop.

Ortiz managed to grab the cane from the suspect without getting hurt.

"She damaged my vehicle. I grabbed onto the cane somehow and I took it from her and I drove away."

But Ortiz said the situation escalated even further while trying to get to police.

"There's two cars behind me and we're coming down Illinois. She couldn't hit me from behind and flips a U and comes at me head on and I'm like what am I going to do."

Eventually, Ortiz is able to get away and now she said she is working with police to identify the suspect.

A warning for drivers everywhere that taking matters into your own hands might not always be the answer.

Ortiz said police expect to charge the suspect with hit and run and assault with a deadly weapon.

Authorities said if you are ever in a situation like that do not follow anyone. Just get a license plate number and call police.