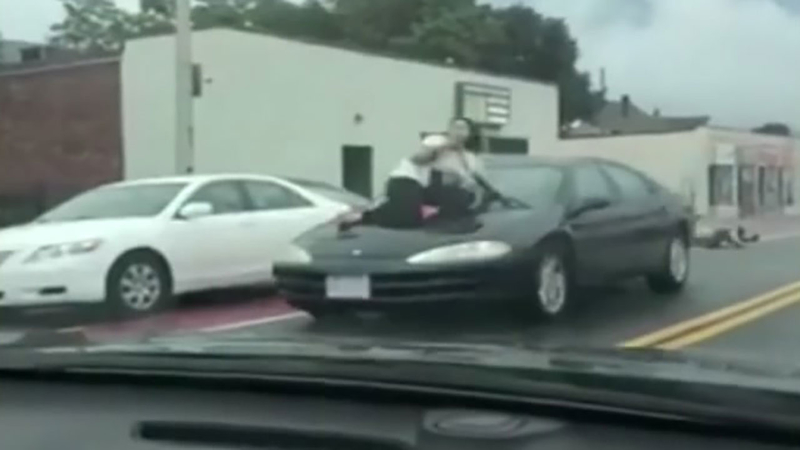 BOSTON, Massachusetts -- A road rage case in Massachusetts led to charges after shocking video showed a woman behind the wheel of a car while another woman hangs on the hood.

"It was like a movie, to be honest with you," witness Asaad Alsaray said to WFXT-TV.

Alsaray couldn't believe his eyes. A woman was hanging onto the hood for dear life during a hit-and-run accident involving a scooter.

Surveillance video from moments before shows the car also pushing a man down the street.

Alsaray says the woman seen clinging onto the hood eventually jumped off several hundred feet down the road. He called 911 and continued following the driver, who was later identified as Jakrah Pires.

His persistence led police to Pires in a shopping plaza two miles away.

After facing a judge, Pires draped a hood over her face and exiting the courthouse.

Her attorney claims the man and woman on a scooter started it.

"They were kicking her car and trying to attack, causing her to flee in fear of her safety," attorney Thomas Polito said.

Investigators say surveillance video shows Pires initially tapping the scooter because she thought the couple on it was going too slow.

Police allege the man driving that scooter reacted by kicking the car before Pires kicked it up a notch, stepping on the gas.