Do you recognize them? Thieves steal child's motocross bikes 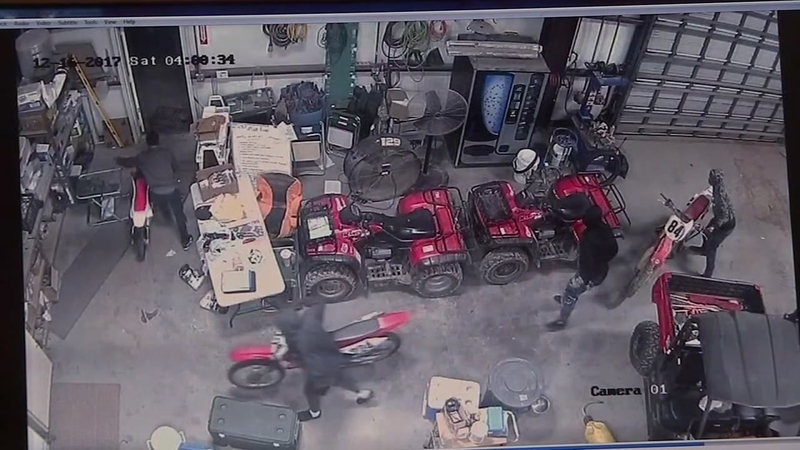 Do you recognize them? Thieves steal motocross bikes

HOUSTON, Texas (KTRK) -- A young boy is upset after thieves broke into a motocross garage and stole several bikes, including his own.

One of those people impacted is Shawn Wilkerson, who loved his motocross bike.

"When I would hit all the big jumps I could feel the air coming around me," Wilkerson said.

But he's grounded after his prized possession was stolen.

The park's owner said the thieves used a crowbar to bust through the door and a bolt cutter to break through the bike's chains.

"Most of the bikes had custom suspension," Rio Bravo Motocross Park owner Danny Erdeljac said. "So the average cost of the bike was between $6,000 and $8,000."

Do you recognize these people? Deputies said a group broke into a motocross park shop and stole 8 bikes, including one belonging to an 11-year-old. See the surveillance video on @abc13houston at 5pm. pic.twitter.com/Wk4E0UxwWe

This isn't the first theft involving motocross bikes in the area.

Harris County deputies said bikes are an easy target because you don't need plates or title to sell the equipment.

Sometimes they find the stolen bikes for sale on apps and websites in a matter of hours after they're reported missing.

"They had talked about wanting a new bike, but not being able to afford one because he's outgrowing his 65, but he was riding that currently," Erdeljac said. "Now, all he has is a bicycle to ride."

But Shawn's hoping he won't have to ride the bicycle long if the surveillance video will help lead to an arrest.

"They're a bunch of fools, and they shouldn't be doing that," Wilkerson said.

His family created a gofundme account to ask for help.