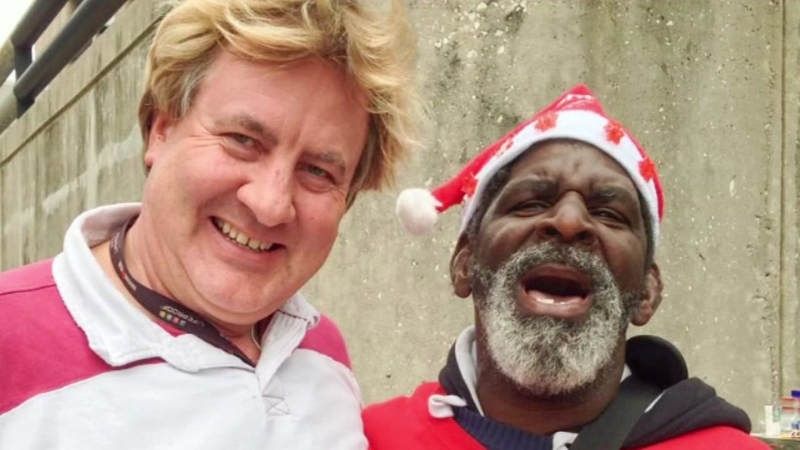 HOUSTON (KTRK) -- Rick Johnson is better known as the 'courthouse candy man' in downtown Houston. He's been at the corner of Caroline and Franklin Streets for a decade.

You often can hear him shouting, "Don't worry, be happy" to those on their way into court as he sells candy.

Lawyers like Vivian King who've befriended him over the years are helping him with expenses and stopping by his house to visit him. A group even set up a GoFundMe account to help with his home care.

"Rick is one of our shining stars at the courthouse. He dances with us. He embarrasses us. He does not allow anybody to be snooty," King said. "I'm praying that a miracle happens."

Johnson spoke with ABC13 from his bedside. He said he is overwhelmed by the support.

"Is that your motto?" asked reporter Steve Campion.

Lawyer Deborah Keyser first met Johnson more than a decade ago. She said he was selling umbrellas outside the courthouse. On a sunny day, she suggested he switch to M&M'S. She even went to the store and bought the first box. He paid her back. She has continued buying boxes all these years.

"Rick is the heartbeat of the courthouse. It's been really quiet since he's been ill and not had him out there," said Keyser. "The courthouse is a place where we go in and there are so many tragic things happening all the time. It's always nice to have somebody upbeat and positive whenever where coming in and or leaving."
Related topics:
houstoncancer
Copyright © 2021 KTRK-TV. All Rights Reserved.
TOP STORIES
Father and daughter, both longtime teachers, killed in Germany crash
2 Houston college students recall 12-hour robbery and kidnapping
Homeowners stop construction while Houston, GLO continue fight
This Houston hospital is reporting 500% increase in COVID admissions
Cooling downpours Tuesday bring heat relief to some
Woman Turns to Ted for refund help after winter storm canceled trip
Houston stretch of I-45 named most deadly highway in the U.S.
Show More
Man charged with shooting transgender woman he met on dating site
Is Houston seeing a mirror image of last year's COVID summer surge?
Man in custody after barricading himself in apartment, HPD says
Houston Ballet announces ticket sales for the holiday season
Woman charged with murder after shooting homeless woman
More TOP STORIES News