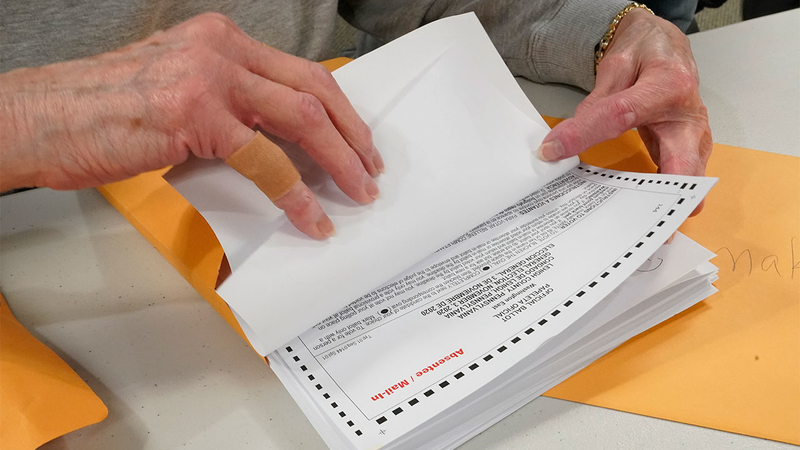 ERIE, Pa. -- A Pennsylvania postal worker has recanted claims that supervisors attempted to backdate ballots mailed after the election, according to congressional aides. The false allegations were cited by the Trump campaign and top Republicans as examples of voter fraud impacting the results of the presidential election.

The Trump campaign, which, like the president, has rejected the results of the election and alleged widespread -- and unsubstantiated -- voter fraud, passed Hopkins' account to Senate Judiciary Committee Chairman Lindsey Graham, who referred the matter to the Justice Department and FBI for investigation.

But Hopkins walked back his assertions when questioned by federal investigators with the Postal Service Inspector General's office, the leader of the watchdog agency told the House Oversight Committee staff on Tuesday.

"IG investigators informed Committee staff today that they interviewed Hopkins on Friday, but that Hopkins RECANTED HIS ALLEGATIONS yesterday and did not explain why he signed a false affidavit," committee Democrats said in a statement posted to Twitter.

ABC News can characterize Joe Biden as the apparent winner in Pennsylvania -- a win that makes him president-elect.

A DOJ official told ABC News Monday that Attorney General William Barr had referred the accusations of backdating mail-in ballots in Pennsylvania to the FBI for further investigation, in addition to other allegations regarding ineligible voters casting ballots in Nevada.

The official told ABC News it was one of the cases Barr had referred to in an extraordinary Monday memo to U.S. attorneys across the country reversing a longstanding department policy intended to keep the department from launching election-related investigations prior to vote results being certified.

"I authorize you to pursue substantial allegations of voting and vote tabulation irregularities prior to the certification of elections in your jurisdictions in certain cases, as I have already done in specific instances," Barr said.

Barr's letter included several caveats noting the department had thus far uncovered no such information "that voting irregularities have impacted the outcome of any election," and said "specious, speculative, fanciful or far-fetched claims should not be a basis for initiating federal inquiries."
Graham, and a Justice Department spokesperson did not immediately respond to requests for comment. Hopkins did not respond to messages seeking comment.

"The Postal Service became aware of these allegations on Friday, November 6. They were immediately referred to the U.S. Postal Inspection Service and the Office of Inspector General, and the matter remains under investigation," a Postal Service spokesperson told ABC News.

"The U.S. Postal Service Office of Inspector General does not comment on ongoing matters," a spokesperson for the service's internal watchdog agency told ABC News.

The Trump campaign, which cited the allegation in a federal lawsuit filed Monday to prevent Pennsylvania from certifying the state's election results, was caught off guard by the news of Hopkins recanting his allegations.

"He filed a very detailed affidavit. He named names. He described explicitly what it is that he experienced. And we don't know what kind of pressure he has been under since he publicly made those statements," Trump campaign spokesman Tim Murtaugh said on a press call Tuesday evening.