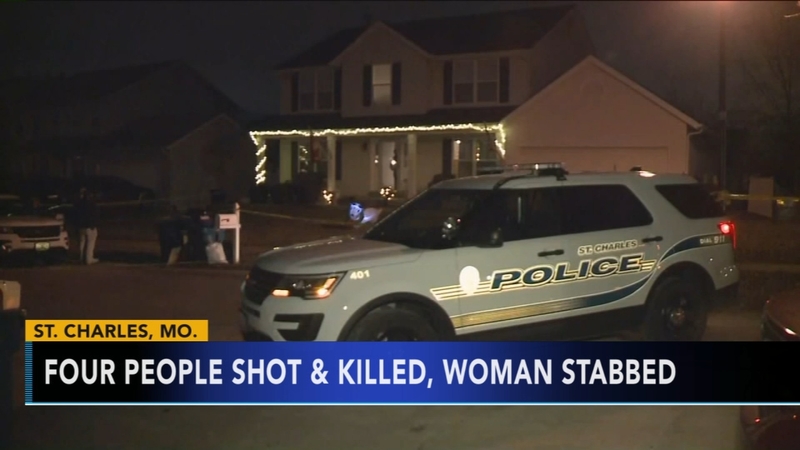 ST LOUIS, Missouri -- A St. Louis-area man shot to death his girlfriend, her two young children and her mother in the home they all shared, authorities said Saturday. He exchanged gunfire with officers as he fled and was captured several hours later in a convenience store, covered in blood and wounded.

Prosecutors filed 15 charges against Richard Darren Emery of St. Charles, Missouri, including first-degree murder, assault and attempted robbery. Authorities said Emery, 46, abandoned his own pickup and tried unsuccessfully to steal a woman's car while on the run, attacking her as well.

Emery remained in a local hospital with two gunshot wounds that authorities said did not appear self-inflicted and most likely came from the shootout with officers. St. Charles County Prosecuting Attorney Tim Lohmar said investigators did not know the motive for the shootings as of Saturday evening.

St. Charles is a city of about 70,000 residents on the Missouri River northwest of St. Louis. Officials said it's had of spate of deadly domestic violence incidents recently -- with six deaths in the past eight days that Lohmar said are unrelated.

Officials said police received a call just before midnight Friday about a shooting at the house where Emery and the victims lived. Lohmar said officers later found three victims dead of gunshot wounds in one bedroom. They were Zoe Kasten, 8; her brother, Jonathan Kasten, 10; and their grandmother, Jane Moeckel, 61.

Officers found the fourth victim, a 39-year-old woman, in the home's master bedroom, suffering from gunshot wounds but still alive, Lohmar said. She was taken to an area hospital, where she died.

Authorities did not name the fourth victim but described her as the children's mother, the daughter of the older woman and Emery's girlfriend.

The initial call came to police came from inside the house, and Lohmar said investigators believe Moeckel made it.

"During that phone call, the 911 operator could hear gunshots in the background," St. Charles Police Lt. Tom Wilkison said.

Lohmar said Emery attempted to flee in his pickup and was stopped by a police car. He and the officers exchanged shots, and he fled on foot.

Authorities described his attempt to steal another vehicle as a carjacking and said he stabbed its female driver seven times. They said her injuries were not life-threatening.

The area is wooded, and Lohmar said Emery was able to elude police in the dark. But when he sought shelter in the bathroom of the convenience store a few miles away, an employee contacted police, Lohmar said.

Each of the charges against Emery carries a possible penalty of 30 years to life in prison, Lohmar said, adding that more charges are possible and seeking the death penalty is an option under Missouri law.

"It's premature for us to make any sort of pronouncement about that right now, but I can tell you this thing looks and smells like a death penalty case," he said.
Report a correction or typo
Related topics:
missourimurderhomicide investigationshootingu.s. & worldchild shot
Copyright © 2022 by The Associated Press. All Rights Reserved.
TOP STORIES
Preacher reaches out to suspect who stole from his church twice
Carjacking suspect threw 3-year-old out of truck, mother says
Officer shoots suspect in northeast Houston, HPD says
Fifth Ward residents upset over Union Pacific campaign donations
Expert weighs in on when you can buy a car amid chip shortage
Lina Hidalgo suggests DA could have her 'indicted' as political ploy
Santa Fe librarian still trying to make sense of high school shooting
Show More
Houston janitors fight for an increase in hourly pay
Police have no leads on skeletal remains found nearly 6 months ago
Here's why we're increasing rain chances and rainfall amounts
Houston Dash standout expresses excitement on equal pay decision
18-year-old arrested in shooting death of man with cane, HPD says
More TOP STORIES News