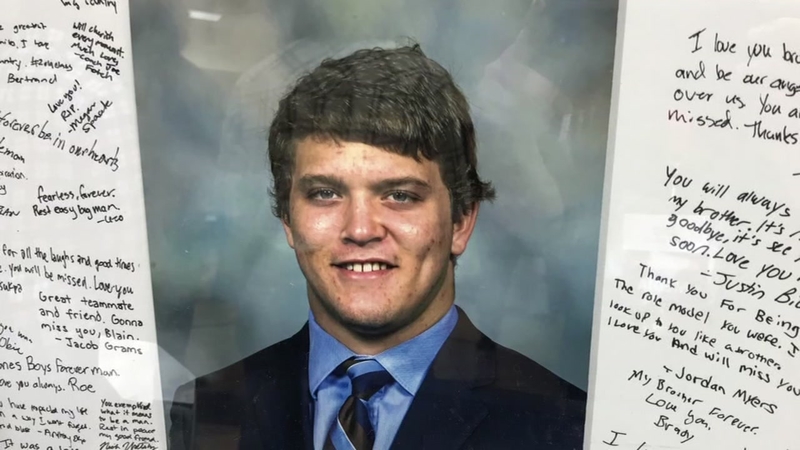 HOUSTON, Texas (KTRK) -- On Tuesday, the cause of death for a star defensive end for the Rice Owls was released.

The Harris County Medical Examiner's Office says Blain Padgett, 21, died due to toxic effects of carfentanil, which is is an analog of the synthetic opioid analgesic fentanyl.

Following release of the findings, Blain Padgett's father, Mical Padgett, says the family wants to know how his son got a hold of the substance:

"The family is very devastated by the news and how it came out of the blue. The way we heard about it is very disappointing. We would like to know how Blain got his hands on this drug that seems very difficult to get. That's our main question. How did he get it and why did he take it? Sadly, nothing we find out will bring Blain back, which is what we really want."

Dr. Richard Pesikoff, a Baylor College of Medicine employee, said carfentanil is a dangerous opioid that was designed to be an elephant tranquilizer.

Dr. Pesikoff said carfentanil is deadly because it causes the brain to suppress breathing.

"It's a dangerous recreational drug," Dr. Pesikoff said. "Probably the most dangerous. Maybe LSD is equally as dangerous because it comes in micrograms and just the tiny bit that you touch go through the pores in your skin."

Rice University also released its statement on Tuesday:
"The Rice community was deeply saddened by the loss of Blain Padgett. Out of respect for Blain and his family, we will not discuss personal or private matters. His family, teammates and friends continue to have our deepest condolences."

The school's athletics confirmed that Padgett died on March 2, after he no-showed a workout that same day.

"Our team is devastated by this news," Rice Owls head coach Mike Bloomgren said in a statement back in March. "All of my thoughts right now are how best to help Blain's family and his teammates in this very difficult period."

Padgett, who was billed at 6'5" and 250 pounds, completed his third season at Rice as a redshirt junior. He called Sour Lake, Texas home and he graduated from Hardin Jefferson High School.

While at Hardin Jefferson, Padgett was honored as a defensive MVP for the team. He also was four-year starter for the Hawks and notched district championships in track and field.

During his freshman year, Padgett was thrust immediately into the lineup and made his first collegiate start vs. Southern Miss.

Padgett had a monster sophomore year, leading the defensive line with 41 tackles and 5.5 tackles for loss.

The Padgett family released this statement on March 2: