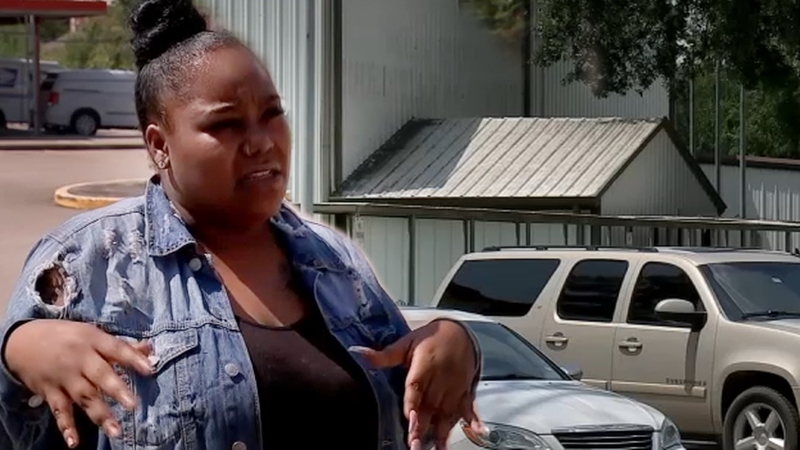 CHANNELVIEW, Texas (KTRK) -- A Channelview mother said she feared for son's safety and well-being after a bus driver never dropped her son off at his stop.

Chasity Washington said her son, Ayden, called her almost an hour after his usual drop off time from the bus driver's cell phone Tuesday afternoon. She said she couldn't get a straight answer as to his whereabouts.

Washington said the bus driver eventually hung up on her.

A Channelview mother says she was blowing off steam in social media post, but then her child's school kicked him out of class.

"I want to make parents aware this is happening. No parent should have to fear for their child's safety," Washington said. "I asked her what church they were at several times. She never said what church or what her name was. She ended up hanging up."

Washington said she called the transportation manager at Rhodes School for the Performing Arts. She couldn't get any answers.

She said she felt worried and sick to her stomach about the situation.

Washington said a neighbor fortunately noticed her son at another school and drove him home. She ended up writing about the ordeal in a social media post. Washington admitted she was heated when she wrote on Facebook. She said on Wednesday the school called.

They told her she threatened the bus driver and withdrew her son from school.

"I may have used a couple of words that probably wasn't the best," Washington said. "She said there was a situation that went viral, and basically she said I threatened the bus driver and that I have to pick up my son and find him another school to go to. She said she was protecting her employee but no one protected my son. No one protected my son."

Washington said the school later called and invited her son back to class. She said she doesn't feel comfortable Rhodes can keep him safe. He won't be returning to the campus.

In a request for comment, Rhodes Center for the Performing Arts released the following statement to Eyewitness News. They said the driver missed the bus stop:
"Research of US School Shootings has shown that these violent events can be prevented because the acts are typically planned in advance, the actors tell others beforehand about their violent plans, and the acts are often carried out because there is a level of desperation or the view that violence is the only option left to solve problems.

The parent posted on Facebook and talked about murdering the bus driver. She referred to the driver as a "b**tch" and a "h**." Others in her thread were also engaging in threatening language and indicated that they would support her. She made a second post stating that she was planning to come to the administration building and Facebook live her visit.

While we understand the parent was upset about her child's missed bus stop, the terroristic nature of her post, and the gang-like mentality of those commenting on the post were very alarming and fit the profile for an increased likelihood of a violent act. Therefore, out of an abundance of caution, we acted to create physical distance between our school and the parent immediately to ensure the safety of all of our students and staff.

Our office reached out to the parent the same day to try and work with her to get her son back in school as soon as possible, while at the same time ensuring that other students and staff were safe; however, the parent elected not to have her son return.

The number one priority of RSPA is student and staff safety. We took the parent's threats seriously and believe our actions in this case were necessary and warranted."