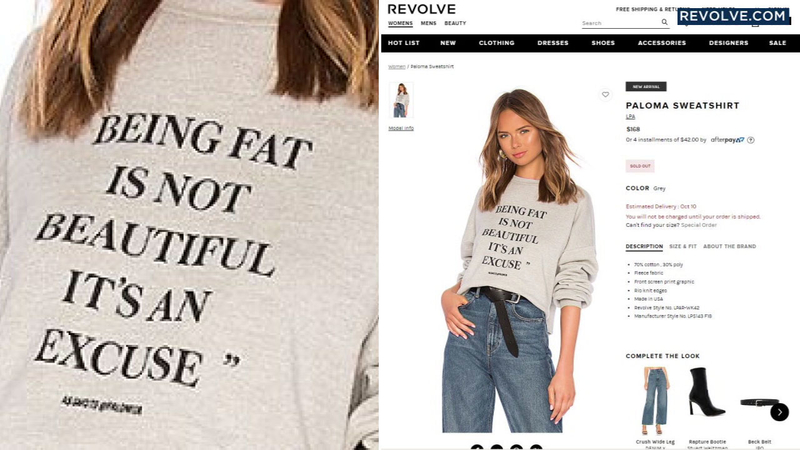 A $168 sweater sparked immediate social media uproar after it was posted for purchase by online retailer REVOLVE.

The sweater reads in bold "BEING FAT IS NOT BEAUTIFUL, IT'S AN EXCUSE."

A spokesperson for REVOLVE said the sweater, which was made by Southern California-based designer LPA, was actually meant to empower women.

The piece of clothing was allegedly part of a collection that was set to debut Thursday as a "direct commentary on the modern day 'normality' of cyber-bullying and the shared desire to create a community for those most affected by the epidemic."

The spokesperson said proceeds were set to benefit "Girls Write Now," but the item was released "without context of the overall campaign."

The designer behind the brand is now reportedly calling it a misguided attempt to reclaim those words.

The sweater has since been removed from REVOLVE's website, and the spokesperson said a total of $20,000 is being donated to "'Girls Write Now' in the hopes that those who need it can still benefit from what was to be a meaningful, insightful and impactful collaboration by LPA."

Read the statement from REVOLVE to Eyewitness News below:
This morning, images of a forth coming LPA collection were prematurely released on Revolve.com. The capsule collection - originally conceived by LPA alongside Lena Dunham, Emily Ratajkowski, Cara Delevingne, Suki Waterhouse and Paloma Elsesser - was set to debut tomorrow as a direct commentary on the modern day "normality" of cyber-bullying and the shared desire to create a community for those most affected by the epidemic. Proceeds were set to benefit "Girls Write Now", a charity focused on mentoring underserved young women and helping them find their voices and tell their stories through writing.

The prematurely released images featured on Revolve.com were not only included without context of the overall campaign but regrettably featured one of the pieces on a model who's size was not reflective of the piece's commentary on body positivity. We at Revolve sincerely apologize to all those involved - particularly Lena, Emily, Cara, Suki and Paloma - our loyal customers, and the community as a whole for this error.