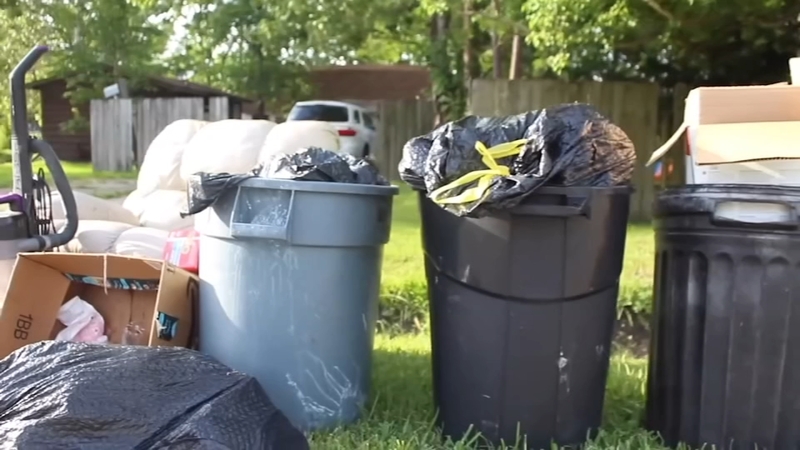 Neighbors' frustrated as garbage pick-up comes to a halt

DICKINSON, Texas (KTRK) -- The flies and frustration are mounting in Dickinson for neighbors who have gone weeks without trash pickup.

As Dickinson neighbor Richard Karns walks through his property, there's one thing he couldn't avoid.

From the porch, behind his shed, and in front of his home, there's trash everywhere.

"We're getting ready to buy an extra trash can so we can put trash in it," Karns explained. "We don't know when it's going to get picked up."

Karns said Republic Services hasn't picked up his garbage in more than 10 days. He says there's no debt.

In fact, he's earned enough credits from missed collections that they owe him money.

"It reeks out here," Dickinson City Council member Sean Skipworth said. "A gentleman told me yesterday he dumps bleach on his garbage to keep the maggots from developing. This is not something people should have to live with."

Dickinson is under contract with Republic Services.

"We strive to provide reliable recycling and waste services to all of our customers, and we expect to be compensated for those services per our agreement with the City of Dickinson and Galveston County Water Control and Improvement District #1. Unfortunately, collecting outstanding balances has created years of persistent challenges. We have attempted to work with the City and County to mitigate this ongoing problem, but have not been able to reach an agreeable solution. Therefore, on June 19, we informed the City and County that we would suspend service on accounts that had been closed or suspended for non-payment. Additionally, we notified impacted customers in mid-July and have set up a direct phone line to re-establish service. We are continuing to work with the City and County to resolve this matter as quickly as possible and remain committed to serving this community."

It's a response not sitting well with city leaders who are looking at options.

"They're going to have to be shamed publicly, seems how it has to be that they don't want to just pick up the garbage," Skipworth said.

Karns said until changes are made, he's looking to bring his trash to the dump.

"I've seen incompetent companies before, but this company takes the cake," Karns said.

City leaders said since neighbors pay Republic Services directly, and not through their utility bill, their hands are tied.

They plan to discuss new options during next month's city council meeting.

If a new company is selected, neighbors will have to use Republic Services for another seven months. The contract doesn't expire until March.