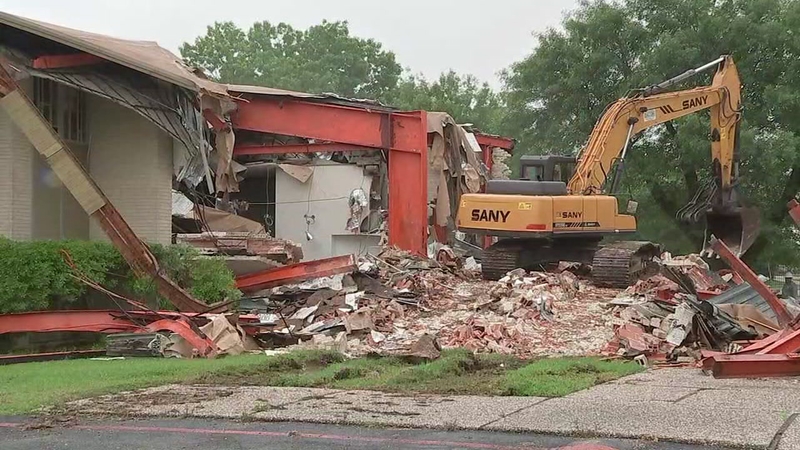 HOUSTON, Texas (KTRK) -- An Orthodox Jewish synagogue in Houston that has served members for generations is being demolished Monday.

During Hurricane Harvey, the United Orthodox Synagogues campus, located in the 9000 block of Greenwillow Street, flooded for the third time in as many years.

A final service was held at the campus back in February.

"I think we all will be saying a special prayer to give everybody strength and fortitude to continue on," said long-time member Linda Freedman Block, whose relatives helped build the synagogue decades ago.

Countless life cycle events were held in the sanctuary: baby namings, bar mitzvahs, weddings and funerals. It is the center of the congregation's religious life.

"It's like any place that you love, that you spend a lot of time in," said Freedman Block.

In December, the congregation decided it was time to demolish the main building, including the sanctuary, offices and classrooms.

"It will be sad," said Freedman Block.

Damage from the floodwaters caused extensive damage to the facility. Everything the water touched was ruined, including thousands of prayer books and religious texts.
"We will continue to be a religious center for the Jewish community of Houston," said Rabbi Barry Gelman, who has insisted a rebuilding is in progress. "The only question is, what the new building is going to look like. Where precisely it's going to be."

The congregation is made up of more than 300 families who live nearby.

Followers of Orthodox Judaism generally do not drive on the Sabbath, so moving the synagogue very far isn't much of an option.

Gelman said, though, they have not decided if they'll elevate and rebuild on their current campus or maybe close by.

Members are looking at the devastation as a chance to start over, a rebirth and recommitment to their faith.

"The synagogue is not really just about the building. It's really the people in it," insisted Freedman Block.

The congregation is in the process of raising more than $6 million for new construction.

ABC13's Kevin Quinn reports from the United Orthodox Synagogues campus in Meyerland, where it will be demolished.