KTRK
By Mayra Moreno
CLEVELAND, TX (KTRK) -- Following in the footsteps of Katy, Cleveland ISD has decided to add "In God we trust" decals to its fleet. To their surprise, they received a lot of support.

"When I went to them with this idea and the A.G.'s opinion (I) pulled out my card to pay for it," said Chief Rex Evans with the Cleveland ISD Police Department.

It was a donation the chief did not expect.

"(They said) your money is no good here," said the chief.

Free decals for his entire fleet with the phrase "In God we trust."

"I think it's important to bring it back, especially with the events going on today," said Mike Mize with Good Promotions.

Chief Evans said he was happy to follow in the city of Katy's footsteps even though they received some negative feedback.

"I don't feel that it represents the entire population of the community," said Emily Elders, Katy resident.

Katy was the second city in the state to do so after the Texas A.G. released his opinion on the issue.

"Certainly not trying to push it on anyone but we have the equal right to say it," said the chief.

A close call for Chief Evans changed his take on everything.

"It was a shots fired call man with a gun," he recalled.

However, after more than two decades in law enforcement, the four words have a deeper meaning at least for him.

"If people choose to take it in a religious tone, whether for or against, then they have that right in this country," said the chief.

Cleveland ISD is the first law enforcement agency in Liberty County to display the decals on its patrol units but more agencies in the county are following suit including the Liberty Co. Sheriff's Office. 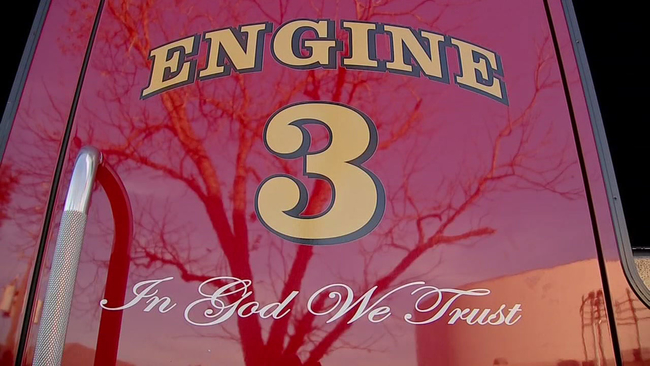