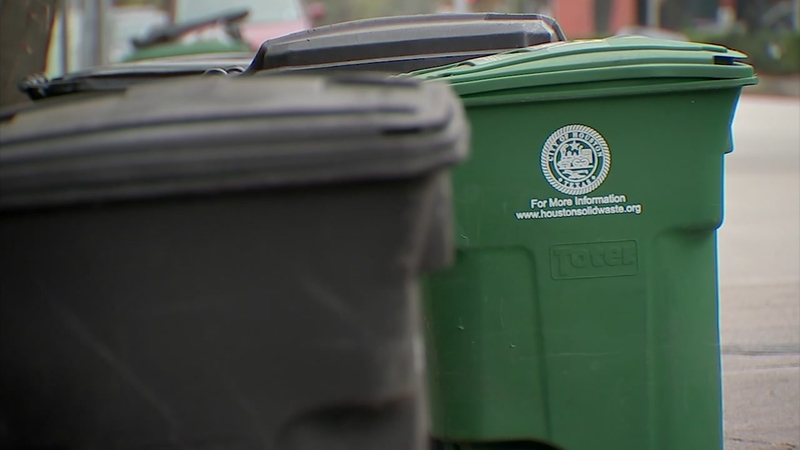 HOUSTON, Texas (KTRK) -- In a rapid reversal of dumpster dollars and cents, recycling is now costing the city of Houston hundreds of thousands of dollars every month. A short time ago, it was a money-maker for the city.

It's not the fault of anyone in Houston. It's a worldwide problem, affecting major cities from coast to coast and even small municipal utility districts, which are simply known as MUDs.

"The recycling (day)? It used to be Wednesday," Debra Cherry, a resident of Inwood in northwest Harris County, told ABC13. "(Now there is) no recycling day."

Recycling in MUD 119 was cancelled earlier this fall when Republic Waste, the trash hauler, raised rates. The MUD dropped it from the contract.

"It was just too expensive," resident Arnold Esparza told us.

Now all the boxes, bags and bottles that used to be recycled are all headed to the landfill.

Cities and towns, from west Texas to upstate New York, are facing possible recycling cancellation. In Philadelphia, the city is burning some recyclables to deal with the budget impact.

The costs jumped when China stopped buying America's recycling earlier this year. The move sunk prices for the materials you leave in your green bin.

"For us to sell material, it has to be extremely high quality," Susan Robinson from Waste Management explained. "The bar's been set very high. That's not likely to change."

Eighteen months ago, China would accept 500 pounds of trash per ton of recycling. It is now just 10 pounds of trash per ton. It's had the effect of virtually closing China to American recyclables, nearly killing the ability of cities like Houston to make money off the paper, plastic, metal and cardboard you put at your curb. Experts tell us there is not yet an American market to make up the difference.

The long-term solution may be to change your habits by keeping trash separate from recycling.

"Almost a third of every truck - on a national average - that comes into a recycling facility is not recyclable," Republic Waste's Richard Coupland informed ABC13.

Without immediate change in quality measures, the only solution is to raise prices. Not every city is willing to pay.

Susan Robinson from Waste Management tells us, "We do have cities across the country that are having to make really tough decisions based on the cost of recycling."

Republic's Coupland echoed, "The economics are structurally broken in the country right now for recycling."

In the city of Houston, recycling is still being picked up, but the costs have skyrocketed. City records for the last six months available show Houston taxpayers have paid nearly $900,000 for recycling. That is more than twice what taxpayers shelled out six months earlier.

There is some good news, at least in Houston. Starting next year, the city's costs will dramatically drop when service transfers to FCC, the company that won a hard fought contract battle to collect Houston's recyclables for the next 20 years.

In a recent speech to waste industry insiders, Houston Mayor Sylvester Turner bragged the new contract will cut the city's costs by 67 percent, at a time when prices across the country are skyrocketing.

Under the new deal, FCC agreed Houston taxpayers would pay no more than $19 per ton to process city recyclables. For the last six months, the actual Houston cost has been $53 per ton. In Dallas, FCC is currently paid $71 per ton.

After declining an on-camera interview, FCC's lobbyist told ABC13 Investigates, "Where the recycling industry is at today, isn't necessarily where it will be in two years, five years or 10 years...Our facility (will be) in a better position to face adverse commodity markets."

"We've seen the steady decline in commodity prices over the past five to 10 years," Republic's Coupland told ABC13. "We haven't seen them come back to where they were prior to that."

Susan Robinson at Waste Management added, "We see markets right-sizing, rebalancing over time that those quality requirements aren't likely to change, which requires additional cost to the customer."