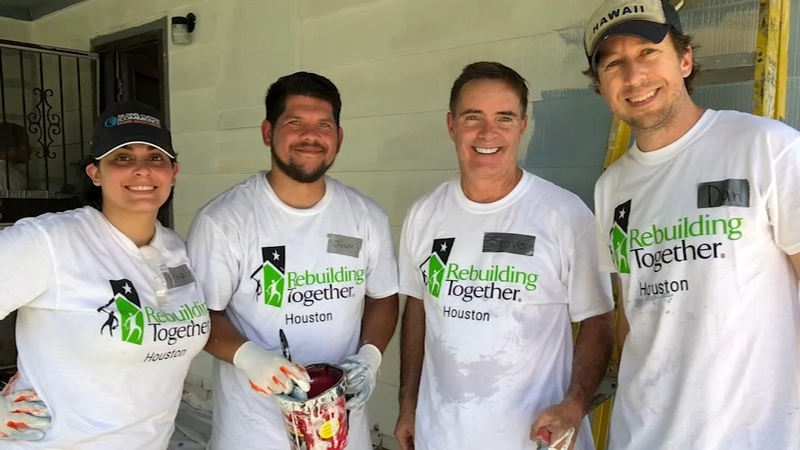 HOUSTON, Texas (KTRK) -- In the almost 30 years that Jacquelyn Dalcour has been living in her northeast Houston home, she's seen her house flood four times. The worst damage came during Hurricane Harvey.

"In Harvey, we sustained a lot of damage, because the water came up about three and a half feet for sure," said Dalcour.

But them, disaster struck again when her pipes burst during last February's freeze. Both times, she was able to get repairs she needed at no cost, thanks to the non-profit Rebuilding Together Houston.

"Rebuilding Together Houston repairs the homes of our neighbors in need," said Christine Holland, CEO of Rebuilding Together Houston. "So we work only with homeowners. The people we serve are low income people. Many are elderly, many are living on social security and they shouldn't have to make a choice between putting food on the table and making a repair to their home."

The non-profit's impact on the community reaches far and wide.

"Rebuilding Together turned 40 on January first of this year," said Holland. "Forty years later, here we are, still repairing people's houses. We believe we have completed repairs for 14,600 families, which interestingly enough is about a family a day for 40 years."

But it wasn't until Hurricane Harvey in 2017 that Rebuilding Together Houston found itself responding to disasters.

"Before Harvey, Rebuilding Together had not really done hurricane recovery," said Holland. "We came in later and replaced blue tarp roofs through a program with the City of Houston years after Ike, but we had never jumped in like that until Harvey because it was such a catastrophic event. No one could sit on the sidelines."

Rebuilding Together Houston rallied its volunteers to help, fixing hundreds of Harvey-damaged homes, including Jacquelyn Dalcour's. It made all the difference to her, because Harvey wasn't the only tragedy she had faced that year.

"We had to get out. And my husband kind of lingered until the last minute," said Dalcour. "So he had to go. He had to get out on a boat. And he ended up in a shelter, but he never should have gotten wet, because he has congestive heart failure. When I lost my husband, everybody was grieving. And it was a hard time to go through Harvey. We buried him in November. Harvey happened in August. So it was from the hospital to the stroke to the next hospital to the grave. And it was very depressing."

Although she received some FEMA assistance, repairs to her flooded home went slowly at first.

"I had hired a guy, but the guy never finished," said Dalcour. "Bottom line, I didn't get the money back."

"She still had problems," said Holland. "She had things that the previous groups who worked on her home had not been able to address. So when she came to us, we sent an inspector out and we looked at our safety checklist and we looked at the house and said here are some things that still need to be done for your home. So we're going to do those for you."

"I get emotional, because a lot of it I walked through myself because my husband was gone," said Dalcour. "He would just walk up and down the sidewalk. I didn't even know those were his last steps in this area. He didn't even get to meet the volunteers."

But almost as soon as her repairs were finally finished, disaster struck again in February 2021.

"It really was terrible because I had five leaks in my pipes," said Dalcour. "On the porch I had water standing in the globe and that was a problem because it had bucked the sheet rock underneath and it looked like it could fall down at any time. And I was actually scared to walk in and out of my house."

"When the winter storm hit, she was what we called 'in the family', meaning we had served her before," said Holland. "She knew to call us again."

"I told him I have no water," said Dalcour. "He said, you have no water? I said, I have no water. I have no lights. They came right on out. The porch, the garage - both porches were messed up. So Rebuilding Together came and they fixed all of that, because I mean, nobody was going to do that. Most seniors just don't have the money laying around to fix things as they break."

In the past year, Rebuilding Together Houston has been able to repair more than 250 homes damaged in the winter storm.

"With our elderly homeowners, 94-percent of them say they want to age in place," said Holland. "But they can't do that if their home's not safe."

While it has helped thousands of people over the years, Rebuilding Together Houston is focusing its latest effort on veterans, and on helping families in Houston's East End.

"Harris County is home to the second largest veteran population in the nation," said Holland. "And we particularly enjoy serving them to thank them for their service. Our other main program right now is called Community Revitalization. And it is focused on the East End of Houston. East End is one of the largest and most culturally important neighborhoods in Houston. It is a largely Hispanic population."

In the coming year, Rebuilding Together Houston is celebrating its 40th anniversary with a series of special projects.

"On MLK Day we announced that we are building 40 ramps for 40 years," said Holland. "So those are wheelchair ramps anywhere in Harris County. In March, we're going to have women in construction week. When we get to June, it's 40 roofs for 40 years.

But in order to make all of these repairs, Rebuilding Together Houston says it will need volunteers.

"We say that our volunteers are our heart," said Holland. "The majority of the volunteer crews come from corporations. But we also have a lot of volunteers that come from churches and sometimes they come from schools. People come, they get to personally be in the community and meet a homeowner like Ms. Dalcour and it just really touches their hearts."