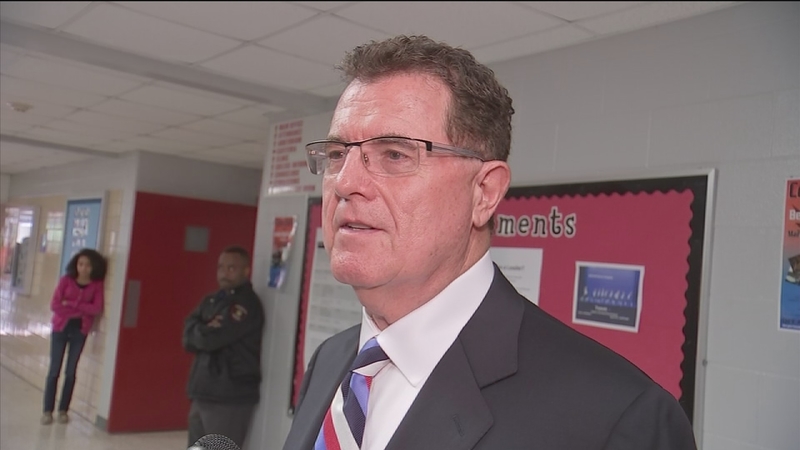 Speaking out on grade changing allegations

HOUSTON (KTRK) -- A 13 exclusive -- the Houston ISD superintendent is now speaking about the grade-changing allegations rocking the district. We've heard from teachers at several HISD schools who claim they've been told to change student grades. One principal has been fired. Now Eyewitness News caught up with Superintendent Terry Grier.

We have been trying to get in touch with Superintendent Terry Grier for more than two weeks to discuss grade changing concerns within HISD. The public relations department denied my requests for interviews, saying he was not available. On Wednesday morning, we caught him attending a public event and asked him to respond to the grade-changing allegations.

"It's easy to step back and make statements to the press when you hide behind a veil," Dr. Grier said. "Step up, if you know something's wrong, you have a responsibility to say so. And if you do, we'll investigate because we take these things seriously."

Dr. Grier acknowledged the district has an anonymous tip line.

"Of course, and you don't have to be anonymous. Just like you asked me that question, as a teacher, you can talk to me, members of the school board, you can talk to Richard Patton, our internal auditor. There's easy ways to report when you think things are wrong or inappropriate behavior is going on. We respond to it. We take it very seriously," Grier said.

"You know for the most part, the problem is, it's not a new problem. I've been here through nine superintendents and we've heard this for decades. The problem is proving it," she said.

Fallon many teachers who say they were pressured by principals to raise students' grades are afraid they'll be fired if they don't. They're hesitant to give out their names.

"The teachers are afraid, because there are also very subtle ways the principal will get back at them," Fallon explained.

Devalyn Rogers is stepping up, saying she feels pressure from her school administration to change students' grades. She teaches science at Pershing Middle School.

"If you ask a teacher to give another grade as opposed to the one that's earned," Rogers said, "It really doesn't teach the student anything about learning."

She filed a grievance with HISD and also notified the Texas Education Agency. A few months later, she found out her contract is not being renewed.

"I feel like I'm being retaliated against," Rogers said.

Grier said teachers should not feel afraid to report things.

"As a teacher, you can talk to me, members of the school board, you can talk to Richard Patton, our internal auditor," Grier said, "There's easy ways to report when you think things are wrong or inappropriate behavior is going on."

Fallon says she'd like to work with Dr. Grier to develop a safe system to report grade changing concerns.

Her message to teachers is, "There's more of you. If y'all stand up together, that's the whole idea of a union, we can end this."

Rogers is still waiting to hear how HISD will handle her situation.