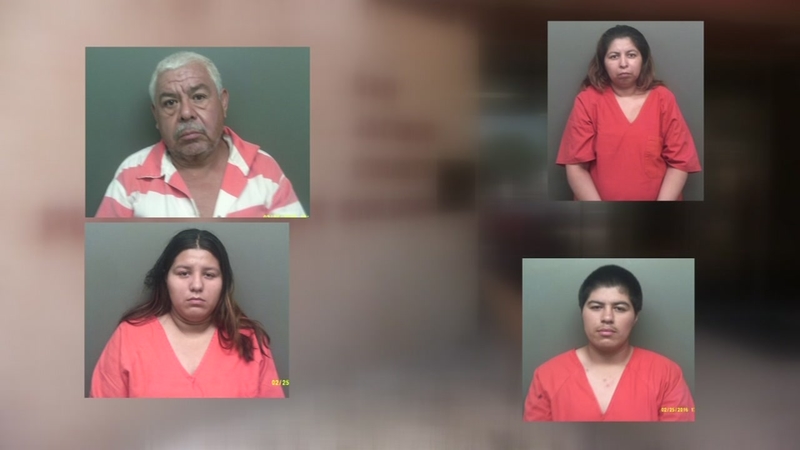 Methamphetamine, cocaine and guns were seized from a house in rural southwest San Jacinto County with alleged ties to the Mexican drug cartel.

Detectives say four adults were arrested: Monica Rodriguez-Tover, 43; Reymundo Casas, 17; Samantha Casas, 21; Jose Angel Maranon Sr., 57. Five children under the age of 12 were also removed from one of the houses and sent to stay with relatives in Houston.

Investigators say Rodriguez-Tovar, Reymundo and Samantha Casas and Maranon Sr., will be charged with manufacturing and giving meth to San Jacinto County inmates known as "trusties."

Trusties are low-risk, non-violent inmates given the privilege of working county jobs outside the jail. No drugs were believed to be distributed inside the facility.

Investigators say the trusties picked up drug packages dropped around the county by this cartel group, then returned to the jail high. We previously reported that drugs were smuggled into the jail. Detectives have since updated that information, saying no drugs were found in the jail.

The San Jacinto Sheriff's Office says the operation began about a month and a half ago. The trusty program has been shut down for the time being.

Investigators set up surveillance to identify where the drugs were being dropped off and who was doing it. Once enough evidence was collected, a warrant was issued for Wednesday morning's bust.

Nearly 40 officers were involved in the raid. The sheriff's office requested help from Harris and Montgomery County SWAT teams.

Everyone was removed safely during the raid. No shots were fired, deputies say. The adults arrested did not put up a fight.

"We know they have connections to drug cartels down in Mexico. Several individuals have been arrested and convicted for possession, done their time, been deported and came back," said Lt. Tim Kean with the San Jacinto County Sheriff's Office.

Authorities tell Eyewitness News the compound has two main buildings and several outbuildings, where they found guns and ammunition.

In one house, a loaded pistol was found in a dresser drawer next to a baby's crib. It's believed the five children slept together in that room. A loaded shotgun was on the floor in the room across the hall.

"It's sickening," Kean said. "I don't know how anybody could put a child through something like that. I really don't."

Four malnourished dogs were found tied to trees. They were so emaciated, they could barely stand.

As many as 80 roosters were on the property, likely part of a cockfighting ring. Many of them were tied to stakes by leash.

A spokesperson for the SPCA tells ABC13 the organization plans to pick up the roosters and the dogs. Right now, they're looking for a place to house all the birds.

Authorities say the home had no electricity. People were using buckets for a bathroom.

Fans ran on power produced by a generator. Massive piles of trash were found everywhere in and outside of the rickety buildings.

Officials are looking into whether or not the dozens of cars and SUVS found on the property were stolen.

Investigators have asked that the location of the raid not be disclosed for their own safety and not to compromise the investigation.