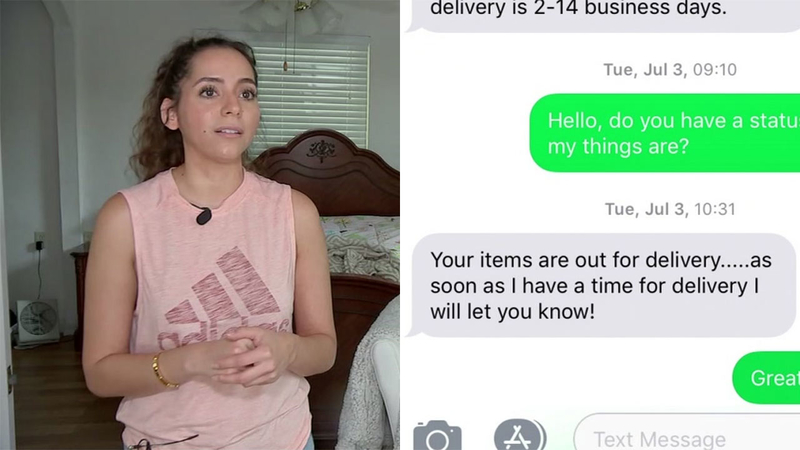 HOUSTON, Texas (KTRK) -- A Houston woman says the moving company she hired disappeared with all her belongings.

Ruby Aguirre hired Quest Moving earlier this summer to move her stuff from California back to Texas.

Aguirre says they came in June to pack up her items. She's still waiting for them to be delivered to her Houston home.

"June 15, they picked up my things," said Aguirre. "I was hoping you guys could figure that out, because here we are almost three months later. My things still aren't here."

Aguirre said she's most worried about family photos, including a picture of her and her late grandfather. She says repeated calls and texts to the Florida-based company have gone unanswered. She shared text messages with Eyewitness News.

In one dated July 3, a company representative texted, "Your items are out for delivery ... as soon as I have a time for delivery I will let you know!"

"I was told two weeks ago," said Aguirre. "It would be here in six days. I still have nothing, so I don't know."

Multiple repeated requests by ABC13 via phone calls, emails, and other messages to Quest Moving also have gone unanswered.

The Better Business Bureau said the company is relatively new. A file was opened for them in March of this year. The BBB currently has 14 open complaints against Quest Moving for billing and delivery issues.

BBB's office in south Florida reached out to Quest Moving after Eyewitness News contacted them. They are still waiting for a formal response.

The Federal Motor Carrier Safety Administration is also checking on the status of Quest Moving. They have tons of information on their website to help with planning a move through protectyourmove.gov.