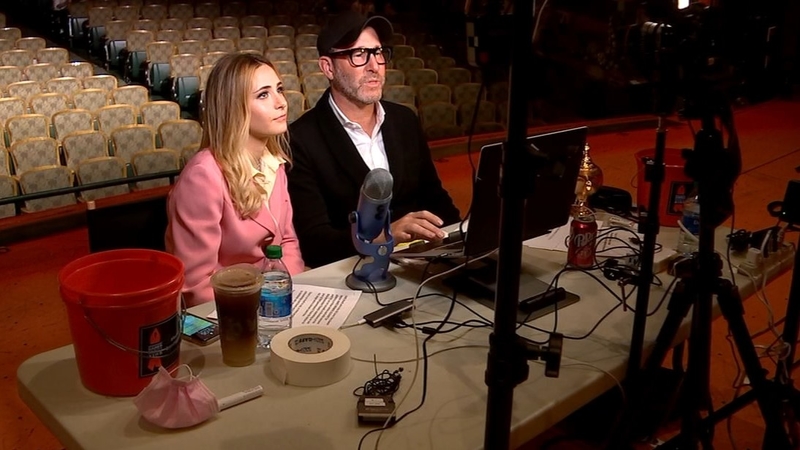 TIMES SQUARE, Manhattan -- The lights went back on in The New Amsterdam Theater in New York City Sunday evening to help those on Broadway who have been out of work for more than a year, as Richard and Demi Weitz capped a year spent raising a fortune for charity with their invitation-only Quarantunes series on Zoom.

Richard Weitz is a powerful Hollywood agent, while 18-year-old Demi Weitz is a daughter determined to do good -- and both came to Times Square to celebrate Quarantunes' one year anniversary.

"We don't ever rehearse," Richards said before the marathon fundraiser began. "We just wing it and go on, and a shining star happens."

Quarantunes involves virtual shows on Zoom with high-profile musical guests and have included John Legend, Bernadette Peters, the cast of "Hamilton," Rod Stewart, Sting, Barry Manilow, and many, many others -- to the tune of more than 200 artists and entertainers.

A series of invitation only, virtual fundraisers is the talk of both coasts because of the big donations coming from some of the heaviest hitters in the entertainment business during each edition of RW Quarantunes.

The charity started with a very modest goal of raising $10,000. Since then, the duo has raised more than $22 million.

"It's all about being genuine and really coming from the right place," Demi said.

Seeing them onstage amid the splendor of the restored theater, it's hard to believe Quarantunes began in their Los Angeles kitchen right after the lockdown began.

It all started after a few fun Zoom calls with their famous and powerful friends.

"Celebrities all over the place," Demi said. "It's my dad having a good time, but standing and looking at it from my place of privilege, I was like, 'This is obnoxious. We have to do something for people who really need it.'"

The theater community is reuniting in Times Square Friday, exactly one year to the day since the Broadway shutdown, for "We Will Be Back," a live pop-up experience and commemoratio

Dozens of organizations have benefited, and the night at The New Amsterdam was their third afford for Broadway Cares/Equity Fights AIDS.

"It's a blessing and a celebration," Executive Director Tom Viola said. "It's extraordinary. I haven't walked backstage in a Broadway house in a year and a half. It's been so moving. It's like coming home."

Disney Theatrical loaned the empty theater for the evening, and a galaxy of stars appeared remotely.

"This partnership works because it's a balance between generations," Demi said.

Her father agreed, highlighting the importance of those who haven't been as negatively affected by the pandemic to take care of others.

"Right now, if you have, you have to pay it forward," Richards said. "I think that's really the lesson that Demi has taught so many people."

The pair has held a series of virtual fundraisers they call, 'Quarantunes,' which could become a model for other events, with so many traditional, charity galas being canceled due

It's also proof of what can be accomplished when a father and daughter work together. Their year-long charity effort has brought them closer, and it's no wonder that Richard calls Quaranratunes, "Our greatest gift during the worst time in our lives."

CLICK HERE to find out you can donate to Broadway Cares/Equity Fights AIDS.