Woman dragged on ground during purse-snatching in NE Houston 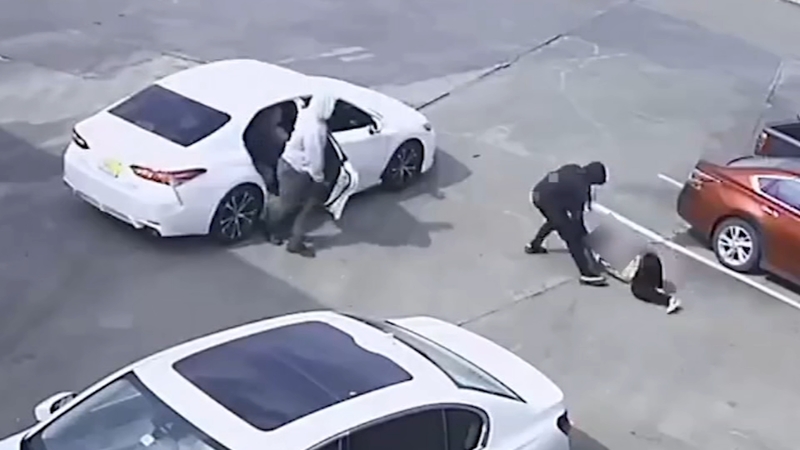 HOUSTON, Texas (KTRK) -- The Houston Police Department's Robbery Division is asking for the public's assistance in identifying the suspects responsible for a purse-snatching caught on surveillance video.

HPD released video Wednesday of the incident from Feb. 26, 2021.

According to a release, the female victim was walking into a building in the 6900 block of North Loop East when she was approached by the male suspect.

The suspect forcibly grabbed her purse, dragging her across the ground for several feet until she was able to let go, police said. You can see the surveillance footage of the robbery in the video above.

The suspect then got into a white Toyota Camry and fled the scene.

The victim says she had just come from a bank and believes she may have been followed by the suspects.

Crime Stoppers describe the man who dragged the victim as a Black male wearing black pants, a black hoodie and a black mask at the time of the robbery.

Officials are also looking for another suspect who got out of the Camry. The second suspect is described as a Black male wearing a white hoodie, grey pants and black shoes.

Crime Stoppers of Houston asks you contact them directly if you have any information related to this investigation. Information leading to the charging and/or arrest of any felony suspects may result in a cash payment up to $5,000. Tipsters must contact Crime Stoppers directly to remain anonymous and to be considered for a cash payment by calling 713-222-TIPS (8477), submitting an online tip at www.crime-stoppers.org or through the Crime Stoppers mobile app.

Video shows the woman being forcibly dragged out of a Fiesta Mart while the suspect holds on to her purse.