100-pound pumpkin returned after allegedly being stolen from porch 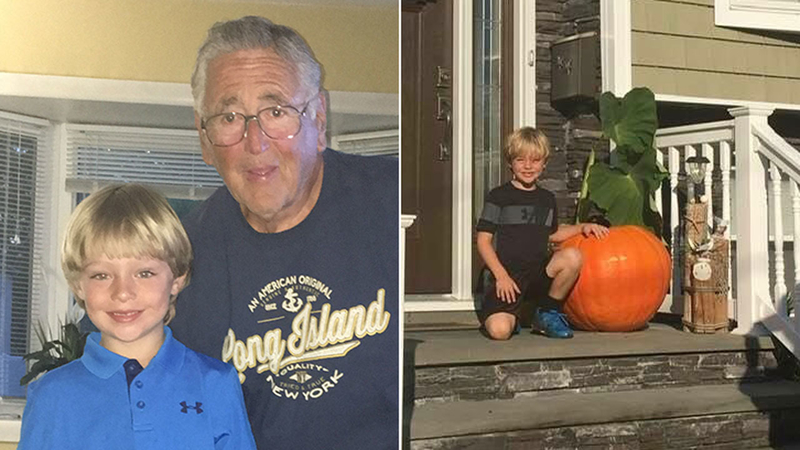 LINDENHURST, New York -- A man's last gift to his grandson, a 100-pound pumpkin, has been returned with a note after being stolen from outside the boy's home.

It was returned anonymously Tuesday night while the boy was out with his mother.

UPDATE: Apparently the pumpkin thief can’t spell. But he (or she) found a conscience! Pumpkin returned anonymously and left on his front lawn in Lindenhurst, while he was out with his mom tonight! The family is so grateful 👍 pic.twitter.com/uEnkQx6yXm

Before Kevin Beckman's grandfather died, he left his grandson the enormous pumpkin. Yet a piece of Pop's legacy went missing when someone stole that Halloween decoration from Kevin's front porch over the weekend.

"Since that pumpkin's been gone, it hasn't been right," 6-year-old Kevin said. "Because it was my last gift from Pop. My Pop."

Pop, also known as Thomas Beckman, loved to grow plants in his garden, and before he passed, he recruited Kevin to help him with a very special project. They took pumpkin seeds from a pumpkin Pop picked last year and planted them in May.

Sadly, the 75-year-old died later that month, but watching the pumpkins grow helped the Beckman's cope with their loss.

"We would go out, we would look at the pumpkins, and we'd see how the pumpkins were progressing," said Deirdre Beckman, Kevin's mother.

Once the healthy-sized pumpkin fully matured, Kevin proudly placed it on the family stoop and that's where someone stole it between Friday night and Saturday morning. Kevin said he cried when he found out.

Afterward, Kevin's aunt, Ann Marie Pesa, posted a photo of him with the pumpkin on her Facebook page in an effort to get the pumpkin back. She wrote that the family was offering a $500 reward for the pumpkin's return or information leading to its return.

"It's funny, but it was kind of part of my dad. I feel like everything that my dad planted grew really well this year," Pesa said.