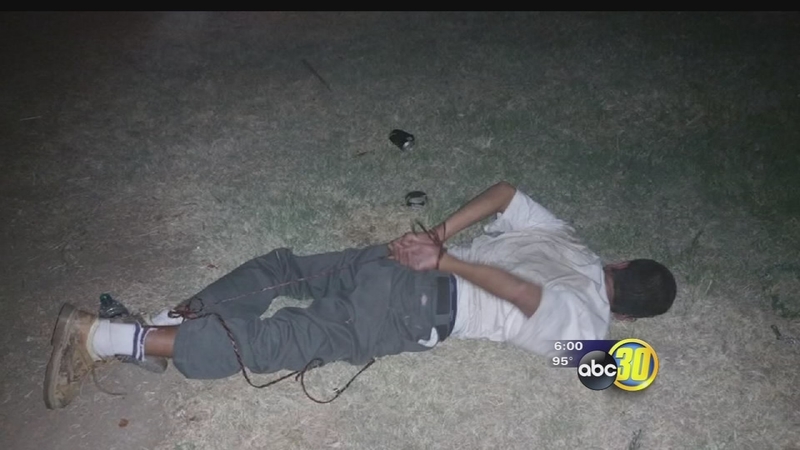 FRESNO, CA -- Three Madera men took matters into their own hands early Thursday morning. A man who tried to break into their house ended up being hog-tied by the men who lived there.

The 1am wakeup call came in the form of loud banging noises. Fence panels were kicked out and then the intruder started banging on windows and the back door.

Julio Carerra was inside at the time. Carrera told us the man was an acquaintance who was not welcome at the home. Julio was one of three men to go outside and confront the suspect.

Madera Police commander Dino Lawson explained, "They're the wrong people to mess with."

Lawson said occasionally suspects are detained by citizens but this was different.

"When the officers arrived they found the suspect face down on the grass in the backyard and basically hog-tied with rope," explained Lawson.

The hands and ankles of 36-year-old Abraham Arias were tightly tied up with rope. Carrera said they didn't want to hurt the man. They just wanted to hold Arias down until officers showed up.

"We don't want citizens to take action," Lawson stressed. "We don't want them to get hurt but they do have the right to protect themselves."

"They told us that he didn't appear to have any weapons and he appeared to be under the influence and they assessed the situation," said Lawson. "He kept banging on the house and they took matters into their own hands."

Abraham Arias was booked on vandalism and prowling charges.