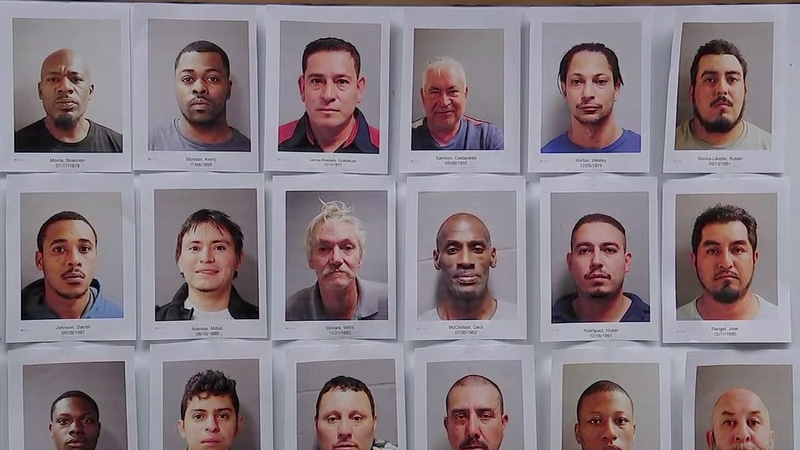 HOUSTON (KTRK) -- More than 200 people were arrested during a 10-day sting that included Super Bowl 51 week in Harris County. Those arrested included members of the Houston Fire Department, Houston ISD and a retired police sergeant.

According to authorities, 249 people were arrested on prostitution charges across the county. Of those arrested, 21 were directly related to Super Bowl activities and prostitution.

The majority of them were johns and prostitutes, and one admitted to being a pimp, HPD said.

Some of the notable arrests include: Houston Fire Department firefighters Alprentice Blanks and Yeuy Teang; Houston ISD senior manager Emile Fair (the district says he does not work around children); Efrail Velasquez, who had his 4-year-old child in the car when he tried to buy sex, according to HPD; Wayne Jones, a retired HPD Sergeant.

"Sure it's embarrassing, very embarrassing. My son called and said 'Dad, you're on TV,'" Wayne Jones answered.

Jones retired 17 years ago from the Burglary and Theft Division at HPD. Like the hundreds of others, he's accused of trying to buy sex from an undercover female officer. He was busted near his house for what he says was just a joke.

"Sometimes things are said in jest and you don't follow through," Jones said. "I would go to court whether it makes Channel 13 or not."

"We had several of them turn around and ask, 'are you going to put my picture out on the media?' That's what they respond to," Harris said.

Aside from the prostitution-related arrests, a total of 107 people were detained during the Super Bowl on other charges.

In comparison, 189 arrests were made in Houston during Super Bowl XXXVIII in 2004.