Could produce prices in Texas rise due to winter storm? 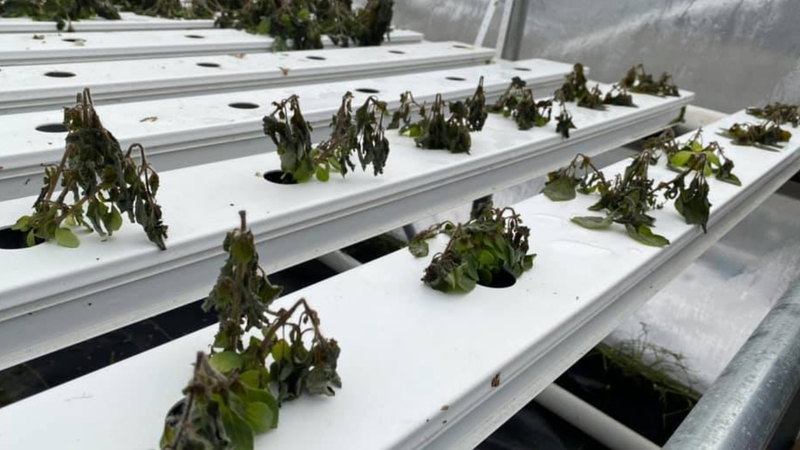 Will produce prices rise due to freeze?

WALLER COUNTY, Texas (KTRK) -- Have you seen all the empty shelves at grocery stores? Are you worried about prices going up?

For answers, look to our local farms, many of which are still covered in ice and snow.

"If affects us all, everybody. From the consumer, to the supplier, to the grower, it's going to hit us all," explained Brenda Koch, who owns VegOut! Farms with her husband, Jeff.

VegOut! Farms is in Pattison, which is in Waller County, about 12 miles northwest of Katy.

The family sells produce to H-E-B stores across the state, but it's been four days since the farm had power.

And now that the electricity is back intermittently, there's still little relief.

In fact, it just gives the Kochs a glimpse into just how much they lost.

The couple sells a variety of vegetables, including tomatoes, strawberries, peppers, and lettuce.

But, when a plant is damaged, it's destroyed, and they have to start with a seed all over again. It's part of how they comply with quality control regulations.

"I'm going to germinate my seed, and that seed to the first day I get my first tomato, is almost four months, four and a half months," Koch said. "March, April, May, June. Then it's summer. I don't grow them in the summer. I can't."

Davis and his family took some of their smallest livestock to their home last night.

They're hoping the newborn calves can survive the week.

"We had one home last night in a coop and got him warmed up," he said. "I'm coming to meet his mama, too, to see if he managed to get with his mama and be happy."

Neither Davis nor Koch will know the true extent of the damage until the freeze is over, but both are hoping to recover quickly.

"I was born to feed people. That's it. And I love it," Koch said. "I still love it and this hurts, but I'll still be in tomorrow, and I'll still be cleaning it out, and we'll still be going because we love what we do."
Report a correction or typo
Related topics:
weatherhoustontexasagricultureweatherfarmingfreeze
Copyright © 2022 KTRK-TV. All Rights Reserved.
WEATHER
Two cold fronts this week
TxDOT crews prepared as temperatures continue to drop
Severe weather threat sparks anxiety for homeowners hit by tornado
What happened to water levels on Clear Lake this weekend?
TOP STORIES
HPD interviewing chase suspect about dad's death in Memorial area
Good Samaritan helps take down chase suspect in NW Harris County
Man accused of setting home on fire to hide mother-in-law's murder
Woman scammed out of earnings in latest scam targeting Uber drivers
Galveston man smuggled 2 men inside coffin, prosecutors say
Aldine ISD votes for no school on Fridays for next 3 weeks
Conroe ISD teacher accused of improper relationship with student
Show More
Survivor opens up about being 'groomed' for sex trafficking at school
Two cold fronts this week
Man denied heart transplant because he has not received COVID vaccine
Barry Bonds rejected from Hall of Fame; Big Papi elected
Who killed Liz Barraza? Reward now at $50K on murder's 3rd anniversary
More TOP STORIES News