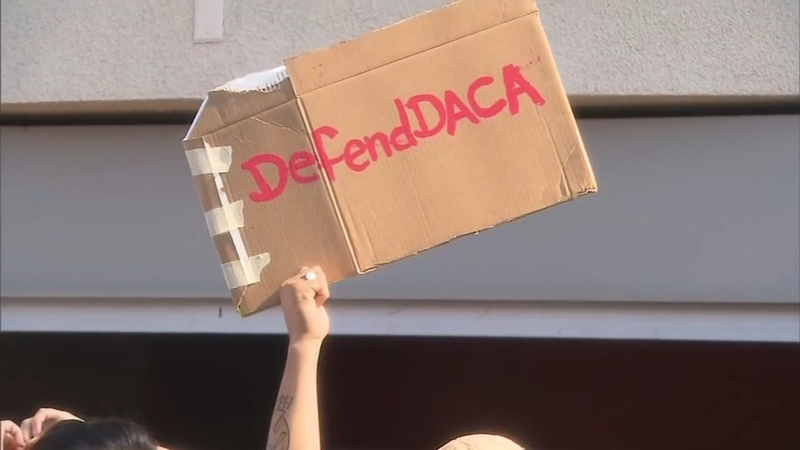 HOUSTON, Texas (KTRK) -- One of his first acts in the oval office, President Joe Biden is sending congress a proposed immigration plan that includes an eight-year pathway to citizenship. Local legal experts, dreamers and FIEL Houston weighed in on the proposed plan.

U.S. citizen Karynna Cabral said she was hopeful as she watched the inauguration along with representatives at FIEL Houston.

"I'm very emotional and I'm very hopeful for our future and our kids' future as well," Cabral said.

President Biden's immigration plan includes lifting the travel ban, investing in technology at the border, an eight-year pathway to citizenship for those living in the U.S. without legal status as of Jan. 1, expanding protections for dreamers and DACA recipients, and allowing the opportunity for immigrants qualify for a green card if they are working or meet other requirements.

"I just remember my mom crying thinking that I was going to, you know, be deported, and that I was going to lose my driver's license and lose my ability to work legally in this country," DACA recipient Jose Ventura said. "And, you know, now we're here. He's just been sworn in as president. You know my mom's happy."

"A lot of people have been deported and separated from their families," Quan said. "One of the things this bill will look at is how do we undo those deportations to allow families to come back together. Under the present law, a person that has been removed basically is barred for life or 20 years from coming back in many cases, and this has been a huge hardship on families. I think that this bill would provide at least some waivers or relief to bring those families back together."

Jacob Monty, with Monty and Ramirez Law Firm, said he has been answering phone calls from business owners, farmers and their employees anxious to know more about the potential policy changes that could impact at least 11 million people.

"After more than 20 years, there's finally at least a prospect that there might be a way to legalize one's status without leaving the country. That is huge," Monty said.

Geoffrey Hoffman, director of the University of Houston Law Center Immigration Clinic, said there is still a lengthy process ahead before the proposal can become law.

"With respect to DACA recipients, especially here in Houston, many of them are essential workers, many of them are in the healthcare industry, etcetera," Hoffman said. "I think this will be, again assuming that it passes and that it comes into fruition, a great benefit."

Monty said he wants families to be cautious and is warning the community to be aware of people who are trying to take advantage of the opportunity and possibly scheme immigrants and their families that are clinging onto hope.

"The point is, it's going to take some time," Monty said. "Celebrate today. It's Inauguration Day. But don't pay anyone. Don't pay a lawyer. Don't pay a Notario, because today there is nothing that can be done for people."