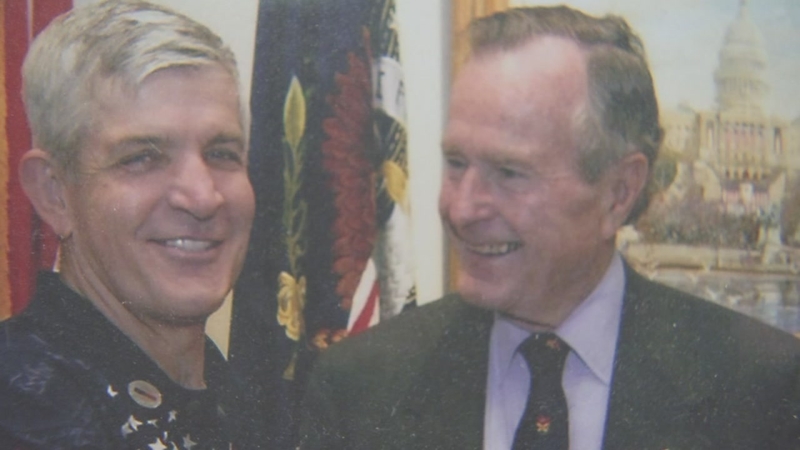 HOUSTON, Texas (KTRK) -- All around the world, people continue to mourn the loss of President George H.W. Bush.

But Bush's impact on Houston goes well beyond what most can imagine.

"President Bush was a great man and a legendary leader for the entire world and the country," said Jim McIngvale, better known as 'Mattress Mack.' "But most especially for Texas and Houston, and he will be missed for decades to come."

The longtime friend of the Bush's has adorned the front entrance of his Gallery Furniture flagship location with personal memorabilia from that very friendship.

One hanging picture captures Bush and Mack with a group of professional tennis players standing in Bush's living room.

"We had a great night that night," Mack said.

It's a mini-exhibition, an homage to tribute Bush 41, the man who lived to serve.

Mack says he does have some of this displayed regularly, but brought out some sentimental items to honor the legacy of his dear friend.

"President Bush was always big on writing personal thank you notes," Mack said pointing to a thank you note matted and framed on the wall. "Just such an incredible man. I must have got 20 or 30 of them."

Described as humble, friendly and a gentleman, Mack says with what you saw was what you got with Bush.

Mack ended the tour with by pointing to a memento from Bush's Navy years, displaying a slab of wood with the letters "CAVU" boldly engraved.

"One of President Bush's favorite sayings was 'CAVU,' which is from his pilot days when he was in the Navy," Mack said. "That means '(ceiling) and visibility unlimited,' and I think he's now up in heaven and it's (CAVU)."