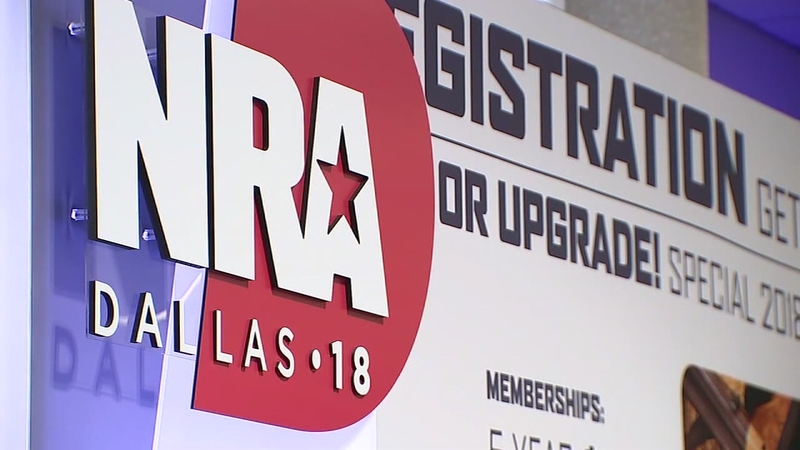 More than 70,000 NRA members expected in Dallas for meeting

DALLAS, Texas (KTRK) -- More than 70,000 members of the National Rifle Association are expected in Dallas for the group's annual meeting, which featured an appearance Friday by President Donald Trump who lauded NRA members for "fighting for our beloved Constitution." The meeting is also drawing protests, including by those who have lost loved ones to gun violence.

Those attending the meeting of the nation's most powerful gun lobby are listening to political speeches, checking out the latest firearms, attending gun training courses and socializing. The meeting runs through Sunday.

This comes after a couple months of backlash following the high school shooting in Parkland, Florida, that killed 17.

Many businesses have dropped NRA sponsorship and politicians in Dallas warned bringing the NRA to its city would generate massive opposition.

Despite this, Houston First, which sells the city to groups, told Eyewitness News it is preparing to bid on a future NRA convention.

The NRA last held its convention in Houston in 2013.

"The convention in Houston five years ago was crazy. Crazy in a good way. It was very busy and we got to meet a lot of customers," Comp-Tax manager Randi Rogers said.

The city said it will try to lure the NRA with financial incentives.

The NRA convention won't be in Houston next year. The event is scheduled to be in Indianapolis.

Rogers hopes Houston can secure the event in the years to come.

"I wouldn't have to take a flight, or a drive or anything myself, it's right there in my backyard," Rogers said.