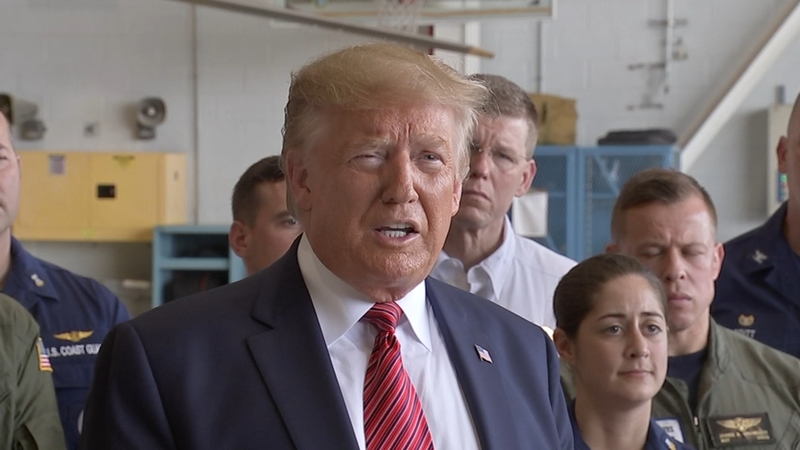 President Trump thanks Coast Guard for work during Imelda

HOUSTON, Texas (KTRK) -- NRG Stadium was packed this Sunday, but not for a football game. Instead it was a rally hosting the prime minister of India for an event called "Howdy, Modi!"

Fifty thousand people inside NRG, all of them there to see the Prime Minister of India, Narendra Modi.

Last Sunday, we learned President Donald Trump would be joining Modi at NRG, both of them on stage during the three-hour mid-morning event.

ABC13 was live at Ellington airport to see Trump touch down in Houston and make his way to the much anticipated event.

The video above shows Trump exiting Air Force One and greeting supporters on the runway.

He later met with the Coast Guard before heading to NRG Stadium.

ABC13's Tom Abrahams got the opportunity to ask him a few questions.

When asked about Texas' resiliency when natural disasters strike, Trump was quick to praise Texans for their positive attitudes.

"People of Texas are incredible. They go through some of these catastrophic floods, hurricanes .. the following morning they're up working and making it beautiful. The last time I came a few days later, people were already out cutting their lawns .. after 5 feet of water. These are amazing people...the people of Texas. That's why I'm here today."

"He's a very highly respected man .. loved in India. He just had an election, won by record number. It was biggest election victory in India, for a long time .. people love him. And he's been very good to us, and so he asked if I would come speak and introduce him and I'm doing that."