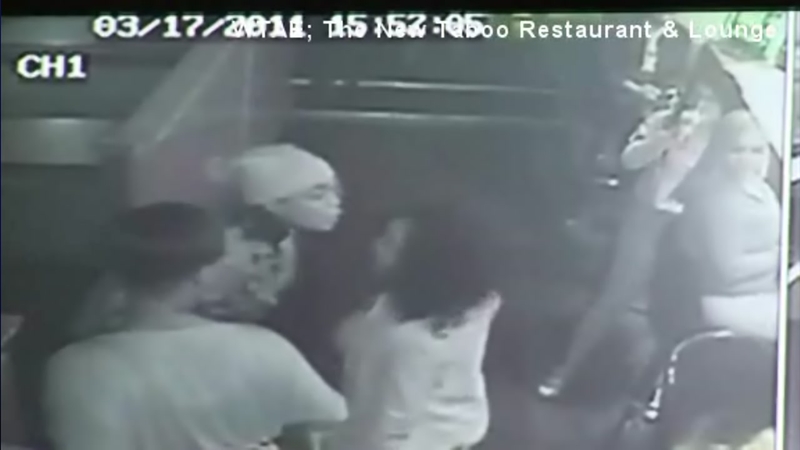 HOUSTON (KTRK) -- A pregnant woman is recovering after she claims she was stabbed during a fight at a Pittsburgh night club, and the incident was caught on camera.

Moments later, Parran leans into Harden and the fight turns physical. Harden punches Parran and the two women are kicking each other in the stomach.

"That's my child and it's not even here yet to defend itself," Parran told WTAE-TV in Pennsylvania.

But the club's manager, Marsha Collins, says the video suggests Parran was the aggressor in the situation and points out the footage shows security guards holding her back.

Parran insists she was the victim.

"I've got bruises on my side, stitches in my shoulder, cuts on my face," Parran said.

Parran also claims she was stabbed during the fight, but Collins doesn't buy that claim.

"If she was stabbed there would be blood on the floor. There would have been flood on the security. Neither," Collins said.

Harden has been charged in the attack.

Parran says her baby is OK.
Related topics:
houstonu.s. & worldcaught on camera
Copyright © 2021 KTRK-TV. All Rights Reserved.
TOP STORIES
Arrest made in case of Alvin abduction, sexual assault of a minor
20-year-old shot to death during break-in of Conroe home, police say
Man accused of dismembering mom's body after murder appears in court
Houston Astros on pace for record beer year
Astros Game 6 guide: Closures around Minute Maid Park back on tonight
Cleveland man indicted in connection with U.S. Capitol attack
The University of St. Thomas offers low-cost counseling services
Show More
JJ Watt on Texans: 'It hurts me to see where' fan base is now
More truck drivers needed to assist with US' supply chain shortage
Don't get stuck in these traffic closures this weekend
Warrant: Baldwin didn't know weapon contained live round
Prop guns: What they are and how they can kill
More TOP STORIES News