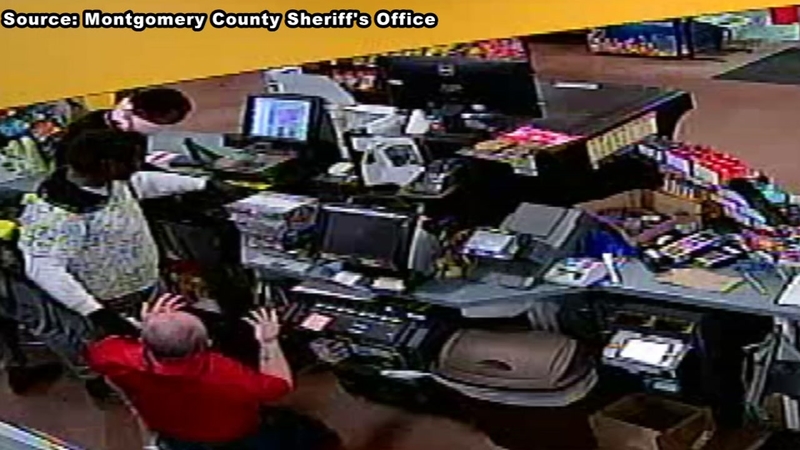 PORTER, Texas (KTRK) -- The men wanted for the armed robbery of an adult bookstore where a worker was raped are now linked to another armed robbery that day.

On Thursday, at about 2:40 a.m., deputies with the Montgomery County Sheriff's Office were called to the Circle K Phillips gas station in the 21900 block of FM 1314 in Porter. Several men armed with pistols had just robbed the store and several customers.

Surveillance video showed the men holding a gun to a customer's head before shoving the victim aside and jumping the counter. A gun was placed to an employee's head and he was ordered to open the cash register.

When a couple of customers walked in the store, the four suspects got down on their knees and tried to hide. Eventually, one of the suspects went out to a customer's car and robbed the victims of their phones before going back inside to continue the robbery.

The suspects stole cigarettes and cash before taking off in a black Dodge Ram truck.

Deputies learned that shortly after this robbery, the Houston Police Department had a similar robbery in their jurisdiction. The suspects entered the Exotic Adult Store located at 15800 block of Eastex Freeway.

During that robbery, the suspects disarmed the security guard and sexually assaulted a store employee.

"(The robbers) came in pretty calm, cool, collected. There was a security guard, but when they walked in with guns drawn, they were able to get his gun and get him before he was able to react," said Sgt. Larry Gibson, a detective with the Houston Police robbery division.

The suspects fled in the security guard's vehicle when the alarm was triggered by employees. The Houston Police Department located the vehicle and a short pursuit ensued before the vehicle crashed.

Police captured one man, but the remaining three suspects are still at large.