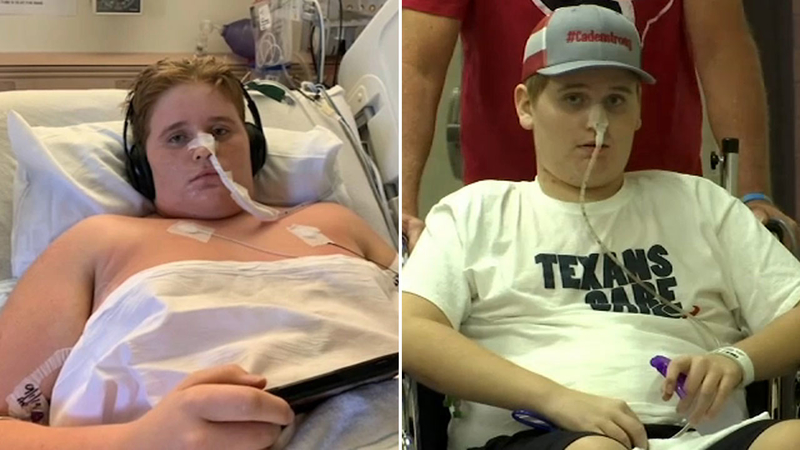 GALVESTON, Texas (KTRK) -- Slow steps down a hallway at The University of Texas Medical Branch at Galveston showed the progress 14-year-old Caden Strimple has made in the weeks since a horrific accident nearly killed him.

"I try not to think about it, but it just pops up," Strimple said.

The teen was with his father at the Fun Town waterpark in Crystal Beach back in August.

At the time, the Galveston County Sheriff's Office said the teen was possibly dared to remove a grate covering a drainage pipe in the pool.

Strimple was then sucked into the pipe, with almost half of his body being pulled in.

"His legs went in and his body had superficial scars," said Jamie Blackburn, the teen's mother.

Strimple managed to escape with the help of bystanders who pulled him out. His father performed CPR and revived him. He was then taken to the hospital.

"We went in (to the hospital) for a perforated intestine," Blackburn said.

An initial surgery was supposed to last two hours, but instead took five.

Doctors discovered Strimple's esophagus detached from his stomach, creating a much bigger and more complex problem.

All of the teen's organs had to be removed and his entire body cleaned out because food debris had exploded in his body.

The teen was then put in a medically-induced coma for two weeks so his body could begin to heal.

Since then, Caden has been slowly recovering - step by step - with the hope to be home by Thanksgiving.

"Before this, I was taking every day for granted, and now I'm going to have to keep my eyes open and be thankful for what I have," he said.

Teen injured after being sucked into pool drain.

ABC13's Nick Natario spoke with folks on Bolivar Peninsula where a teen was seriously injured at a water park.