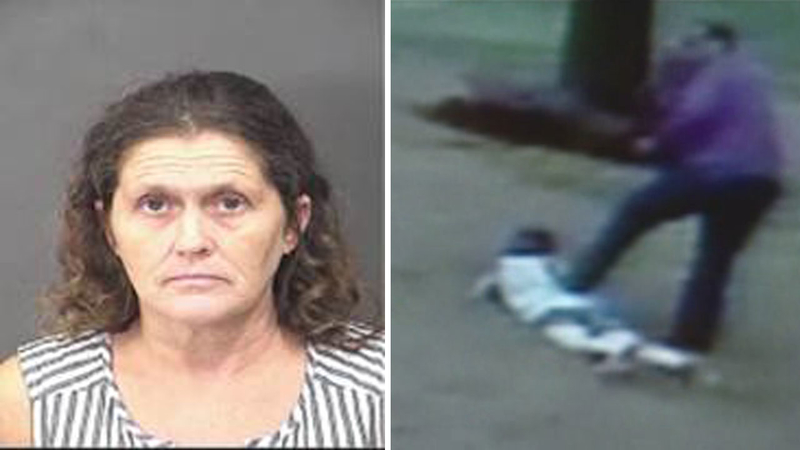 BAYTOWN, TX (KTRK) -- A pistol-packing pastor nabbed a grandmother who police said is responsible for stealing dozens of packages from homeowners' front porches.

On September 12, Laurie Ferguson, 52, was caught stealing some packages from Benny Holmes' front porch, according to the Baytown Police Department.

"He was at his wits end," said Holmes' wife, Pat. "He was determined in his mind that he would sit here, however long it took, to see if he could find her."

Pastor Benny Holmes is seen on video bolting through his front door with a gun in hand. He ordered Ferguson to get on the ground. She did.

"She said I'm looking for my dog," said Holmes. "He said you found your dog. Bow wow," said Pat Holmes.

When police were dispatched to the home, Benny Holmes was holding Ferguson at gunpoint. Investigators believe that Ferguson is the same woman caught on surveillance video driving a red Ford Fiesta and taking packages from the Holmes' porch two previous times this year. Two children could be seen taken out of Ferguson's car. The kids are her grandchildren.

"I learned they had retrieved quite a few packages from her house," said Holmes.

Police said Ferguson had several stolen items in her home that were taken during similar incidents in the neighborhood. Holmes said Ferguson stole a pastor's robe that was delivered to her home in June.

Pat Holmes said she has a gift for Ferguson. She specially made a hat with the word "forgiven" that she hopes to give Ferguson one day.

The Baytown Police Department is asking anyone in the area who had packages missing to give them a call because the items may have been recovered. The department can be reached at 281-422-8371.