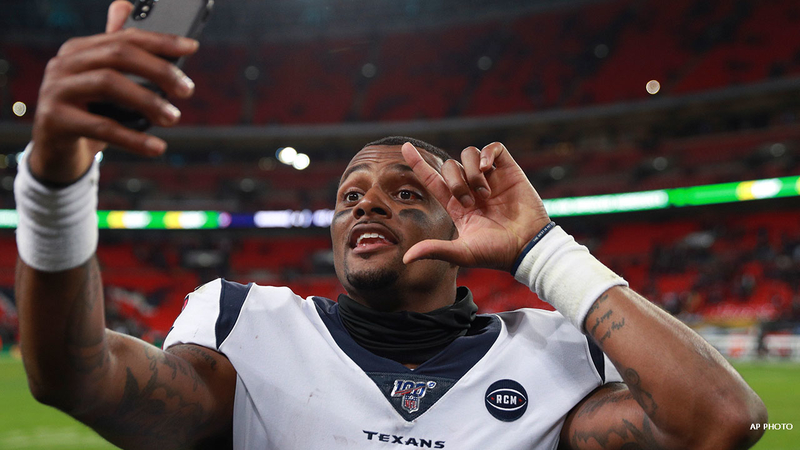 Popeyes chicken sandwiches apparently can do more than satisfy your food cravings. If you're Houston Texans quarterback Deshaun Watson, the coveted sandwich may have some healing power.

Watson's eye was injured when he took a cleat to the face during last week's win over the Oakland Raiders.

On Sunday after the Texans beat the Jacksonville Jaguars 26-3 in the Texans' first-ever game at London's Wembley Stadium, the Houston star made the comment that the key to his eye feeling better was the Popeyes chicken sandwich.

"I'll tell you what the key was -- the Popeyes spicy chicken sandwiches that I ate this week, that helped the eye," he told NFL Network.

"I'll tell you what the key was -- the Popeyes spicy chicken sandwiches that I ate this week, that helped the eye."

—@deshaunwatson on beating the Jaguars after getting kicked in the face last week pic.twitter.com/Mcap3gNLz9

When he talked to reporters during the postgame interview at the podium, a member of the media followed up with Watson about the magic we never knew that sandwich had.

He also confirmed he was one of the lucky foodies to get the sandwich when its popularity first started to soar.

"I did actually. I tried to, I tried it a couple of times and it was actually good. Decent," he assessed.

Sure, we know the sandwich didn't really help, but it's still fun to dream.

The comment was particularly timely because Popeyes brought back the wildly popular sandwich Sunday after promising its return for two months.

It may also not be a coincidence that Popeyes chose Sunday to bring it back. The chain has notoriously mocked their competitor, Chick-fil-A, for their "closed on Sunday" policy.