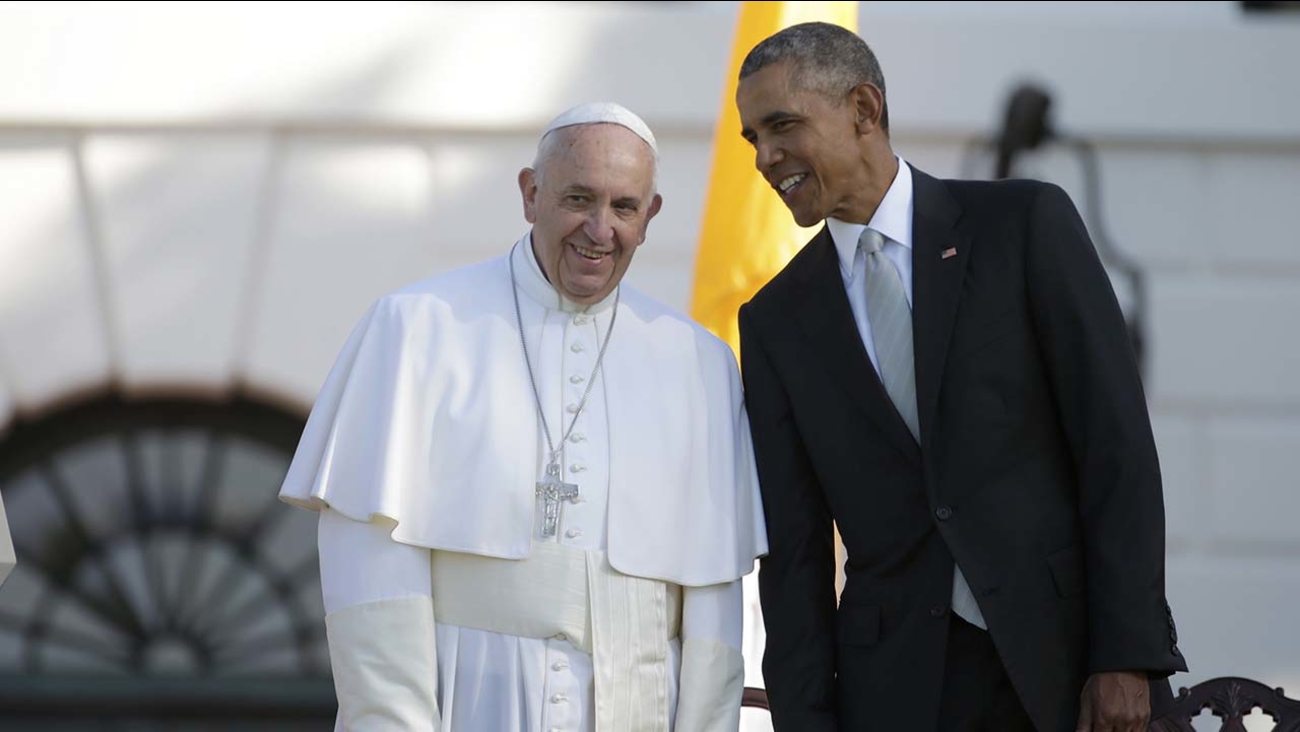 President Barack Obama leans over to talk to Pope Francis during a state arrival ceremony on the South Lawn of the White House in Washington, Wednesday, Sept. 23, 2015. (AP Photo/Pablo Martinez Monsivais)

WASHINGTON (KTRK) -- Plunging headlong into the issues of the day, Pope Francis opened his visit to the United States with a strong call Wednesday for action to combat climate change, calling it a problem that "can no longer be left to a future generation." President Barack Obama, in turn, hailed the pontiff as a moral force who is "shaking us out of our complacency" with reminders to care for the poor and the planet.

The White House mustered all the pageantry it had to offer as the pope arrived before an adoring crowd of thousands and a nation that seemingly cannot get enough of the humble pontiff who is rejuvenating American Catholicism while giving heartburn to some of its conservatives.

Cheering crowds, with some people holding out babies for blessings, jammed a parade route along Constitution Avenue as Francis later made a leisurely loop around the streets near the White House in his open-sided popemobile - a white Jeep - for his first direct encounter with the American public.

Speaking in a soft voice and halting English at the White House, Francis delivered a firm message against those who doubt the science of climate change, saying that the warming planet "demands on our part a serious and responsible recognition" of what awaits today's children.

It was a message sure to please the Obama White House, and liberals in general. But the pope had something for conservatives, too, with a pointed call to protect religious liberties - "one of America's most precious possessions."

"All are called to be vigilant,' he said, "to preserve and defend that freedom from everything that would threaten or compromise it."

It was a welcome message to many U.S. bishops and conservatives who have objected to the Obama administration's health care mandate and the recent Supreme Court legalization of same-sex marriage.

With flags snapping, color guard at attention and a military band's brassy marches, Francis stepped from his modest Fiat onto the South Lawn on a crisp fall morning that felt as optimistic as his own persona. Pope and president stood on a red-carpeted platform bedecked with red, white and blue bunting, standing at attention for the national anthems of the Hole See and the United States.

After their opening remarks on the lawn, Obama and Francis pulled up two arm chairs by the fireplace in the Oval Office for a one-on-one meeting where they hoped to find common cause on issues they hold dear - and respectful disagreement where they differ sharply, on subjects such as abortion and same-sex marriage.

Just before the pope arrived, Obama had tweeted to the Holy Father: "Welcome to the White House, Pontifex! Your messages of love, hope, and peace have inspired us all."

Obama, joking that his backyard is not typically so crowded, told the pope during the welcoming ceremony that the excitement surrounding his visit was a reflection of Francis' "humility, your embrace of simplicity, the gentleness of your words and the generosity of your spirit."

The president singled out the pope's call for focusing on the poor and the marginalized, including refugees fleeing war and immigrants in search of a better life.

Along the parade route, bodyguards ferried several babies from behind police barricades to the Jeep for pontifical kisses. And at one point, a young girl in pigtails and tennis shoes tried to approach the popemobile. When security guards tried to shoo her back, Francis motioned her over and bestowed a papal kiss and blessing.

The pope later in the morning was to speak to America's bishops, an address that was highly anticipated given a certain disconnect between Francis' focus on social justice and a merciful church and the culture wars that America's bishops have waged in recent years over abortion and gay rights.

As bishops have found themselves increasingly on the losing side in the national struggle over marriage and abortion, they have made religious freedom a rallying cry, with a largely domestic focus.

Francis' remarks that religious freedom is "one of American's most precious possessions" could well give them encouragement to keep up the fight.

Obama, sensitive to conservative attacks against his administration, made a point in his remarks of saying "we cherish religious liberty."

From the instant the white-robed and grinning Francis landed in the U.S. on Tuesday, doffed his skullcap in the breeze and clambered into his charcoal-gray Fiat, his visit has electrified wonky Washington, which can be jaded about the comings and goings of world figures.

Washington was the first stop on the pope's six-day, three-city visit to the United States.

Kimberly Johnson, a 27-year-old medical student who lives in Washington, said she arrived outside the security gates at midnight in order to be the first one let into the sectioned-off viewing area that opened at 4 a.m.

"It's not just that he's the pope. He's a cool pope," Johnson said. "He's bringing the Catholic Church into the 21st century and making it a more accessible faith."

The pope took his time getting to the White House, stopping to greet schoolchildren who had gathered outside the Vatican's nunciature. The children took selfies with the pope, hugged him and waved Holy See flags.

Even before he arrived for his first U.S. visit, Francis was fending off conservative criticism of his economic views. He told reporters on his flight from Cuba that some people may have an inaccurate impression that he is "a little bit more left-leaning."

"I am certain that I have never said anything beyond what is in the social doctrine of the church," he said.

From Francis' vantage point, his next stop after the White House was just as critical. The 78-year-old pontiff was meeting with America's 450-strong bishops' conference at the Cathedral of St. Matthew the Apostle.

Many U.S. bishops have struggled to come to terms with Francis' new social justice-minded direction of the church. Nearly all were appointed by Popes John Paul II and Benedict XVI. They prioritized drawing clearer boundaries for Catholic behavior and belief in the face of legalized abortion, advances in gay rights and the exodus of many Westerners from organized religion.

The American church spends hundreds of millions of dollars each year through its social service agencies, and for years has sought an overhaul of the immigration system to reunite families, shelter refugees and give the poor the chance at a better life. But the U.S. Conference of Catholic Bishops has increasingly put its resources behind high-profile fights over abortion, contraception and gay marriage.

Hailing from Argentina, the first pope from the Americas also was acting Wednesday to canonize a Spanish friar who brought the Catholic faith to California.

Francis was to celebrate the Mass of canonization for Junipero Serra in Spanish. Several thousand of the 25,000 tickets to the event were set aside for Spanish-speaking people, many from California. The Basilica of the National Shrine of the Immaculate Conception erected a temporary sanctuary on the east portico for the Mass.

On Thursday, Francis planned to deliver the first papal address ever to Congress, speaking to Republican-majority legislators deeply at odds with Obama on issues such as gay rights, immigration, abortion and climate change. Those same issues are roiling the early months of the presidential campaign.

Francis has been pressing his environmental message ahead of crucial climate change talks later this year in Paris, issuing a major teaching document on humanity's obligation to protect God's creation and aiming to spur world leaders to make commitments to reverse global warming. He will bring that message to the United Nations on Friday.

8:15am: The Pope will arrive on the south lawn of the White House for an official welcome ceremony and meeting with the president.

10am: A papal parade will travel along the National Mall as Pope Francis heads to St. Matthew's Cathedral.

10:30am: The pontiff will pray with bishops of the United States at St. Matthew's Cathedral.

3:15pm: A mass at the Basilica Confident National Shrine of the Emaculate Conception will begin with the Pope and nearly 30,000 people expected in attendance.