What to know about Dana Loesch, the public face of the NRA

KTRK
In the weeks since the Stoneman Douglas school shooting, Dana Loesch has emerged as the public face of the NRA.

Even before taking over as NRA spokeswoman last year, Loesch had a robust conservative following, cultivated on social media - she has 765,000 Twitter followers - and through years of television and radio appearances, including on her own radio program, "The Dana Show."

She's been especially visible since the Parkland shooting. Loesch represented the NRA during a CNN town hall event that also included Stoneman Douglas students, local law enforcement officials and state politicians, and later claimed that members of the media "love mass shootings" because "crying white mothers are ratings gold" to an audience at the Conservative Political Action Conference.

Loesch grew up in a blue-collar family in a small Missouri town near St. Louis, reared mainly by her mother after her parents' divorce. She told The Times that she recalls her grandfather hunting deer and raccoon, but also a night her grandfather stood on the porch with a shotgun to protect her aunt from an estranged husband.

She studied journalism at Webster University, but dropped out when she became pregnant with her first son. She soon began writing a blog about motherhood and started her radio program. She later helped found the St. Louis tea party and had stints as a political analyst at Breitbart News Network and The Blaze.

Loesch, who has said she keeps a handgun near her bed and has a tattoo on her forearm with a reference to a Bible passage calling for Christians to wear holy armor, has never been afraid of being provocative.

During a 2012 radio show, Loesch said she didn't have a problem with Marines who urinated on dead Taliban soldiers, declaring: "I'd drop trou and do it too." 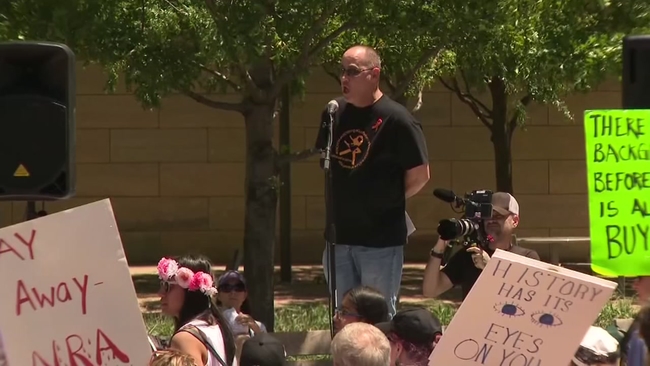