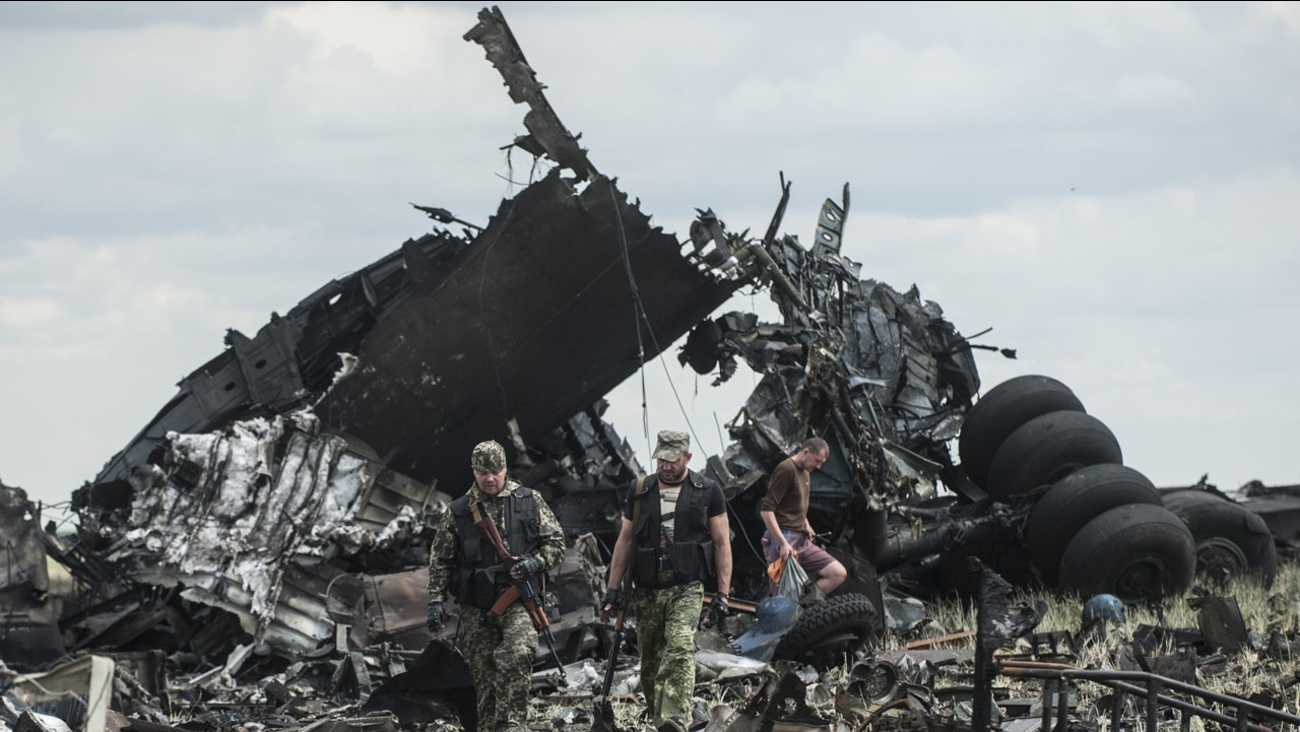 NOVOHANNIVKA, Ukraine -- Ukraine's new president declared Sunday a day of mourning and vowed to punish those responsible after pro-Russia separatists shot down a Ukrainian military transport plane, killing all 49 crew and troops aboard.

It was a bitter setback for the Ukrainian forces - the deadliest single incident yet in their escalating battle against an armed insurgency that the government, backed by the U.S., insists is supported by Russia.

The downing of the plane drew condemnation and concern from the White House, European leaders and U.N. chief Ban Ki-moon. Analysts said it could bring a renewed emphasis on increasing sanctions against Russia.

"(This) will refocus attention on the fact that Russia does not seem to be doing very much to moderate the insurgency (or) the cross-border resupply of separatists," said Timothy Ash, an analyst at Standard Bank PLC. "I would expect the focus to return to sanctions next week."

Poroshenko called for "a detailed analysis of the reasons" for the lapse and hinted that personnel changes were imminent. His office said he vowed to punish "those responsible for the tragedy in Luhansk."

In a conversation with French President Francois Hollande, Poroshenko expressed hope that the European Union would decide on further sanctions against Russia if what he called the illegal border crossings and the supply of weapons did not cease.

Nine crew and 40 troops were aboard the Il-76 troop transport when it went down early Saturday as it approached the airport at Luhansk, the Ukrainian prosecutor general's office said.

The plane's tail section and other pieces of scorched wreckage lay in a field near the village of Novohannivka, 20 kilometers (12 miles) south of Luhansk. An Associated Press reporter saw a dozen or more armed separatists inspecting the crash site.

Luhansk, a city near the border with Russia, is one of two eastern areas where separatists have seized government buildings and declared independence. Ukrainian forces still control the Luhansk airport.

In other fighting, five border guards were killed and seven wounded Saturday in the southern port of Mariupol when their column of vehicles was ambushed, the guards service said.

The U.S. government reiterated its support for Poroshenko's government and rejected Russia's statements that it was not arming the rebels. The U.S. said Russia had sent tanks and rocket launchers to the rebels, making sure the unmarked tanks were of a type not currently being used by Russian forces.

"We condemn the shooting down of the Ukrainian military plane and continue to be deeply concerned about the situation in eastern Ukraine, including by the fact that militant and separatist groups have received heavy weapons from Russia, including tanks, which is a significant escalation," said White House spokeswoman Laura Lucas Magnuson.

Hollande and German Chancellor Angela Merkel jointly called Russian President Vladimir Putin to express their "dismay" over the downing of the plane and said the incident makes clear how urgent a cease-fire is, German government spokesman Georg Streiter said.

Merkel stressed that, for a cease-fire to last, Russia must better control its border with Ukraine to stem the flow of weapons and fighters and the Russian government must also exert its influence on pro-Russia rebels.

The Kiev government has accused Russia of permitting three tanks to cross the border this week into eastern Ukraine, where they were used by rebels. Russia denies supplying the separatists and says Russians fighting in Ukraine are volunteers.

Moscow did not respond to the tank reports but instead accused the Ukrainian military of violating the border several times, including when an armored vehicle ventured about 150 meters (yards) Friday into Russia. The Russian Foreign Ministry warned Saturday if the incursions continued it would "take all necessary measures to suppress them."

NATO, meanwhile, released images Saturday that it said showed recent Russian tank movements near the border. It said the tanks seen in eastern Ukraine "do not bear markings or camouflage paint like those used by the Ukrainian military." It said those tactics were used by the Russians who had seized Crimea in March.

Tensions between Ukraine and Russia escalated in February after pro-Russian President Viktor Yanukovych was driven from office by protesters who wanted closer ties with the European Union and an end to the country's endemic corruption. Russia then seized and annexed Ukraine's Black Sea peninsula of Crimea.

The U.S. and Europe rejected the annexation and responded with financial sanctions targeting individuals. They have threatened to further extend the sanctions to the Russian economy.

Russia says Ukraine owes billions in unpaid gas debts and has set a deadline of Monday before it will demand upfront payments for gas supplies. Ukraine disputes the debt amount and, with its economy in dire straits after the departure of Yanukovych, has little ability to repay. The two sides were also negotiating the price Ukraine will pay for future gas supplies.

Also in Kiev, about a hundred protesters hurled eggs and paint Saturday at the Russian Embassy and overturned several parked cars with diplomatic plates. One held a sign saying "Russia is a killer."